What it means to be a bulldog. 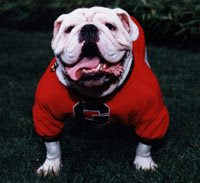 "Why would you CHOOSE to have a yard pest as your mascot? I was thinking about
it in context to Uga. When Uga VI passed, several people said that he
represented everything that the Bulldog Nation stands for. He's tough, he's
loyal, he's strong, and then he's kind of cute and playful for the kids...now
THAT'S a mascot. But a yellow jacket? You nailed it...just an annoyance. To put
it in the context of the Uga discussion, yellow jackets are annoying, not
dangerous (unless you're allergic to them), cowardly..I realize that this does
in fact describe the Yellow Jackets, but is this what they STRIVE to be? Isn't
that what a mascot should represent?"

So that got me thinking, what exactly does it mean to be a bulldog? Well, first I must come clean. I am not in fact a bulldog by collegiate affiliation, however I am a life-long dawg fan. Now you can feed me that garbage about how annoying fans who didn't even go to the school they cheer for are, but if you think only alumni of UGA are buying tickets, apparel, and funding UGA athletics then you are sorely mistaken. I for one like the way the private school chip on my shoulder looks with this fleece vest and cheap bottle of Andre champagne. 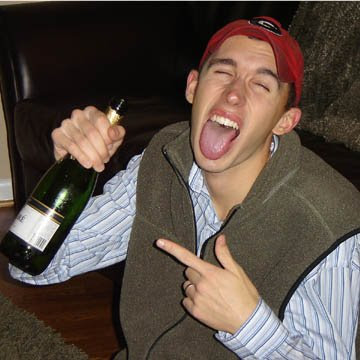 You see that drunken face, bitches? That's the drunken face of a non-taxpayer funded education!

But back to my original topic, what does it mean to be a bulldog. Naycha brought up loyalty, strength, and charm. I thought I'd throw a few more out there. How about the vision of stability, an icon of dedication, the spirit of "never say die". How about a friend to all who will have him, and an enemy to those with bad intention. A ferocious competitor with a proven record of winning (no matter what Stuart Mandel vomits into his columns). How about the wrinkles of an old dawg's face (Larry Munson) and the youthful exuberance of young pups (AJ, Caleb, Knowshon, etc.). What about the Saturday congregation and fellowship among family, friends, and friends you haven't met yet who stumble into your tailgate promising you the world for just a shot of whiskey and a coke to chase it. It's what you set your schedule and calender around, it's the values you raise your kids with, it's the rousing highs of victory mixed with the heartbreaking pain of defeat. It's the charm of southern tradition, the pride of the battle hymn, and vulgarity of barking at total strangers. It's win or lose, you know the next day at church the outcome of the game and your actions following it will be justified before God and your fellow-man. It may not be America's favorite pastime, but it's the South's favorite by far.

I don't know about you, but I can't wait for college football to start. Amen.

UPDATE: My wife, being a big Alabama fan, wanted to add her 2 cents about the similarities between me and a bulldog. I don't find this very funny though.

1. Snoring.
2. Sometimes you drool when you eat or sleep.
3. Public urination.
4. Stubbornness
5. You only have a small bump where your tail should be.
(agree to disagree, I think I have a nice butt)
Posted by Mackie at 1:25 PM

Labels: about me, DAWGS, on my soap box, rants and raves

I'm not a grad of UGA, either...definitely doesn't make us less of a fan.

Thanks for the shout-out...I expect you to call Delilah tonight and dedicate "You're the Inspiration." Nothing says thank you in a manly sort of way like a little Peter Cetera.

True that, I would have gone with Glory of Love, but I have no plans to "take you to my castle far away"...plus that'd be totally gay.

Great post. That actually got me a little excited about football season.

Here's some other things to add to my list at the bottom:

6. Tenacious stubbornness if he decides he really, really doesn't want to do something.
7. Food possessiveness.
8. Flatulence.

But you know, I don't think I want you writing a list of traits about elephants to compare to me, so maybe I'll stop now.