I know this isn't really relevant to the "HA HA your players are in trouble! EAT IT!" type of news I'm usually know for, mostly because this guy played back in the early 70's and I don't know who he is.

But if there was a 58 year old Florida equivalent to UGA's Quincy Carter, it would be in the form of John Reaves. AJC.com is reporting that Reaves is charged with aggravated assault with a firearm, possession of cocaine and introducing contraband into a detention facility. Again if this was any of the QBs from the 90's-2000's I might have more of a rub your face in it mentality...but unfortunately the coke habits of those players have been much better concealed.

After that came out, Urban Meyer cranked up the mass media cover-up for his golden boy, but fortunately I've got connections and was able to get a leaked copy of the infamous "Te-Blow" picture, also known as the Tim Tebow/Tyrone Biggums photo fiasco. The things I do for you, my readers. 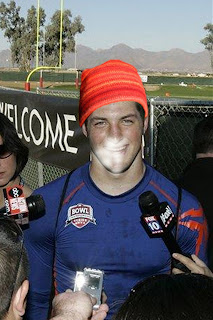 
...in light of the recent gayness shown here I feel the need to let any readers who might misconstrue this fine journalism as "fact", that it is completely fake and as far as I know Tim Tebow doesn't do cocaine. Plus we all know meth is the drug of choice for Gators and Gator fans.
Posted by Mackie at 7:21 AM