Sun Devils running for the hills!

I got this link from EDSBS but ESPN is reporting Arizona's Offensive Tackle, Richard Tuitu'u, who finished #1 on the depth chart just up and left the team.

Coach Dennis Erickson wanted to know what the hell was going on and found Tuitu'u in his dorm room stuck in the fetal position with a video of Rennie Curran blowing through OTs on loop.

Erickson said, "I've never seen anything like that get into a player's head so badly before. If Dick isn't willing to stand in front of a cannon with the fuse lit, I'll find someone else."

The ESPN report goes on to say red shirt freshman Adam Tello got talked into the job saying if he did it just for this one game (UGA) he'd get to play in the no contact jerseys the remaining games of the year.

I assume this is similar to how the weather channel makes the new guys go out on location during hurricane season. 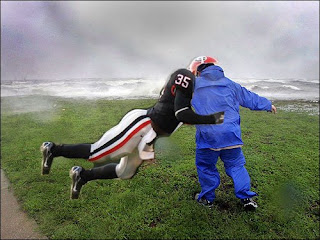 "HOLY FRICK RENNIE I DON'T EVEN HAVE A HELMET ON!"
Posted by Mackie at 1:36 PM

I honestly think you have something with that Rennie photoshop. Maybe you could have him randomly hitting things and people in current events every once in a while. I dunno...just a random thought after laughing at that pic.

great idea, like a whole "On this date in history Rennie hit" segment.