A match forged in the very fires of Hell 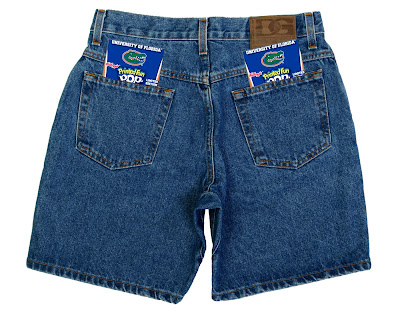 Nothing is sacred, not even your breakfast (but you guys should already know that).

I'll admit I'm curious, mainly because Bulldog Berry has a nice ring to it. But as long as there is a fan base rabid enough to purchase a shoehorn the school logo of your choice stamped on it, there shall be ridonk products like this for sale.

Now if you'll excuse me I need to place a few calls to some local grocers to secure a private shipment by the end of next week.

I married a graduate of the University of Alabama.

There are a 2 concession I'll make to the credit of Alabama's Saturday football experience. Both involve crowd participation:

#1. Rammer Jammer is the biggest kick in the nuts in college football. I've only been on the receiving end of it once...and I hope I never have to sit through it again. Nothing says eternal love like your significant other hitting you in the face with a pom-pom reminding you 2 minutes afterward that her team "just beat the hell outta you".

#2. When they score and everyone sings their fightsong...it's pretty cool. Yes the lyrics are a bit dated (they haven't played Tech since 1984, and haven't "sent the Yellow Jackets to a watery grave" since 1983) and focus solely on opponents in the state of Georgia without mentioning that Cow College they tend to despise most, but it's still a cool experience.

That's why I was pretty excited to see this posted...


So I'm just doing my part to spread the word that we're singing the old fightsong now so lube up the pipes with an extra shot of Makers Mark pregame so you can belt it out with me!

"Hail to Georgia" has been my morning alarm for the last 4 years, it gets me pumped up to crawl out of bed and go cry in the shower until I'm fully awake. My wife might not like it, but I can't wait to sit with 92,746 of my best friends and scream that bitch until I lose my voice.

Posted by Mackie at 7:59 AM No comments:

AP Top 25
I'm not surprised, I figured we'd be in the Top 10 somewhere. I know Phil Steele is high on FSU (having them playing for a National Championship?!) but man...I don't get it. I see them as a Top 20, MAYBE...but definitely not Top 10. Also with Alabama and Michigan both in the Top 10 looks like South Carolina and Arkansas will be moving up quickly after Week 1 (but with a little luck Vandy upsets USCe and they slowly slip back into irrelevancy like early in the 2000's.

I know a lot of Dawg fans aren't keen on us being #6 (or even on the radar). But it's as simple as taking care of business, I don't mind being Top 10 because the way this screwed up system works it helps to be highly thought of (just ask Auburn circa 2004).

How to Sneak Booze into Sporting Events

For most SEC schools the preference is the ol' ziplock baggie or airplane bottles down the bootleg, but that's because they don't let you bring ANY of your own drinks into the stadium.

However, for venues like Turner Field where BARVES fans can bring their own drinks (as long as they aren't alcoholic in nature) this video might come in handy if you want to avoid looking and smelling like you've got a drank on you.

My assumption is that it also works for pre-mixing whiskey into a Coke bottle (for those of you like myself who avoid clear liquors...because we're men) but I found this to be a nice resource.

Of course you could just simply add it to an already opened Coke and try to walk in...but lets face it, whiskey has a unique smell. It looks a little suspicious if you stroll through a turnstile with a built-in smell of masculinity, freedom, and the ability to dance already on your person.

Just thought I'd share. I'm sure since this is the internet someone will just comment that I'm a retard and provide a much more simple (yet less inconspicuous than a factory-sealed bottle) method...but whatever.

I love baseball, but after the All-Star Break the season is over and I resort to feeding my football addiction a steady stream of YouTube videos and Larry Munson DVDs. I find it terribly difficult to rewatch games from last year because of how terrible our offensive line was. These veteran, experienced players were supposed to be a strong-point of our team last year and had our Special Teams not been so abysmal I bet more light would have been shed on their poor performance.

Between that and the ghost of Isaiah Crowell's inability to pick-up a block, Aaron Murray had to hurry passes and scramble more than a QB should have to. This added fuel to the HUTSONMASONSHOULDBESTARTING fire while Murray's accuracy suffered because he had exactly 1 revolving door's turn to make a decision. That decision being, throw it away or highlight tasting notes with Les Miles on fescue varietals.

You win as team, and you lose as a team, but since the horse carcass of our Special Teams has been beaten to a pulp, I want you to just watch how quickly the opposing defense gets through our line. We played better than South Carolina last year, but the errors killed us and ultimately we paid the price starting the season 0-2...which sucked. REALLY BAD.

I'm not concerned about our young Offensive Line this year, because they can't possibly be much worse than last year's. Seth Emerson says the Top 6 look pretty good, but after that our extra reserves have a loooong way to go. #Pray4InjuryFreeFall

Apparently the freshmen TBs are making waves (especially Gurley) and rumor has it he can block too...imagine that! Should our young O-Line hold up, and the freshmen running backs make immediate impact, this could be a special year. I'm more worried about our defense appearing in public without the expressed written consent of the ACCPD than I am about their ability to perform. Coach Grantham will have their asses in line...because you don't mess around with CTG.

In other news...GUESS WHO HAS PHOTOSHOP AGAIN!?!?!1

I'm still getting back into the swing of blogging again. My 8 month affair with Tumblr has taken away my ability to string sentences together...I've reviewed this mediocre post 5x and I'm still not terribly happy with my structure, but I gotta get to work and it'll have to do for now.

I've got a few posts clanging around in my gourd at the moment, maybe over the next few days they'll come to fruition if I catch a break in the action. 2 weeks 'til football, it can't come soon enough.

This bro on Reddit/CFB took the time to make some pretty nice images of team schedules. Figured it'd be worth a share.  Unfortunately they aren't quite big enough to make for a good quality background (most images are 1024x576 resolution) but they look great nonetheless. 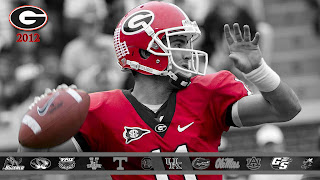 Go Dawgs!
Posted by Mackie at 9:38 AM No comments:

If you have followed my blogs on this site for a while, you know I don't usually go into too many rants about the NFL, but the recent incident surrounding a replacement official's "gambling past" seems to have a lot of people up on arms about the NFL's policy on gambling.

For those that don't follow the NFL or are not aware of the policy, you cannot be involved in any type of gambling activities if you work for or play for any organization in the National Football League.  It doesn't matter if your game is slots, poker, or Pai Gao, gambling by NFL players and employees is prohibited.

Some of you are probably wondering why the NFL cares if their players gamble.  Their rationale is the same as the NCAA in that they are worried about preserving the integrity of their games.  They think that if their players and employees are involved in gambling, they could potentially be influenced to fix games in some way.

While football is a team game, one player can make the difference in a play going wrong or a receiver magically breaking free to score a winning touchdown.  As such, the policy is all encompassing and covers all players and employees regardless of status or tenure.

The only time where the NFL seems to back off of this policy is when players participate in charity poker tournaments.  These events do not award cash prizes to winners, and do not pose a threat of players being influenced to fix games.  Granted, if these events have been held inside of casinos, the NFL has still banned their players from participating.

Even if players were not involved in any fixing of games, the accusation of such fixing would be enough to bring a ton of negative press on the NFL, and that is something that Commissioner Roger Goodell wants to avoid at all cost.

Posted by Mackie at 9:13 AM No comments:

Regardless of the fact that in 5 years I have never blogged like an adult and/or mature person, whatevs. That doesn't guarantee I'll be back to posting daily, but if nothing else I'm back to Blogger.

NEWS: I'm a Dad now which likely means I'm no longer funny...some would argue that you can't lose what you never had.