That was the most frustrating game of the season for me.

I'm glad we won, because I frickin' HATE Tech...but we have some serious issues with fumbles. 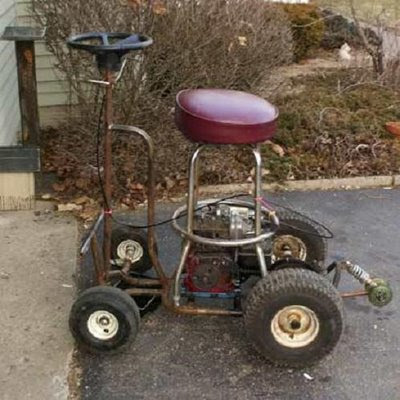 While many tout the iPad or some other garbage Apple product as the greatest invention of the last 10 years...I beg to differ. I totally could have used one of these the other night when I was in no condition to walk. Apparently it's pretty simple to construct. All you need is:
1. counter stools
2. an old lawnmower
3. a friend who can weld (...you're on your own there).
4. a good lawyer

I know Georgia has had a tough season this year. But heading into the Auburn game this year, I'm reminded of 2006.

We were a 4-loss team wrapping up a rebuilding year. Our highly touted, freshman quarterback had looked shaky at times...but he was a freshman so we chalked it up to inexperience. There wasn't much else to play for that year but at least we were already bowl eligible.

My boss has been a season ticket holder since he graduated in the 80's and when I asked him if he was making the trip to Auburn that year he laughed and said "If the Dawgs can't show up for Vanderbilt or Kentucky, I wouldn't put much money on me showing up for #5 Auburn."

Cam Newton is good. Auburn is a well-coached team. All signs point to a loss for the Dawgs.

But when we hit the Plains this Saturday, remember 2006. It was the Matthew Stafford & Tra Battle Electric Boogaloo that kicked off a 3 game win-streak and had fans pumped up for the 2007 season. I'm not saying we'll beat them, but we haven't been blown out all year, and I think even the most pessimistic Dawg fan knows that. Our loss average this year has been by 7 points. Last year our loss average was 16+. We're a couple of tipped passes in the Cocktail Party from playing for the East (if's & but's, who cares).

We can't change the past, but we can be supportive and hold our heads high. You can hate Mike Bobo, you can hate Mark Richt, if you dare try to strangle Todd Grantham clearly you will have a fight on your hands...but you can even hate him too. But it won't change the fact that they're in charge of OUR team for the next 3 weeks, and I say, hopefully longer.

It wasn't over when the Germans bombed Pearl Harbor, and it sure as hell ain't over until WE SAY IT IS!

Aaron Murray, this is your time to shine. Put down the Shake Weight and uncork the magic we felt back in 2006. GO DAWGS! 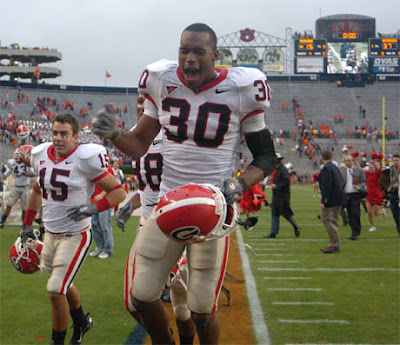