The Senator does a good job of summing up the story on Al from Dadeville. Pro-choice Al perform this Arbortion after being provoked by seeing a Cam Newton jersey on the Bear Bryant statue in Tuscaloosa.

This admission is a complete shock to me. My initial accusations went to Yella Fella whom I presume had a beef with the Auburn Athletic Department. That guy knows all about treating lumber and has told the ticketing office NUMEROUS TIMES to change the nameplate on the Osmose Suite to the YellaWood Suite. 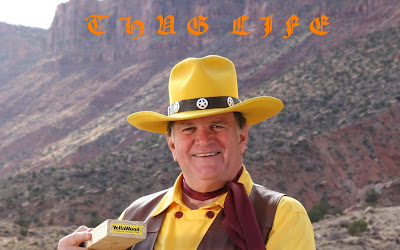 Calls immediately went out for crimson colored Spike 80DF t-shirts to be printed (and I'd be lying if I told you I wouldn't throw $20 toward that investment). But seriously, Al, if you're reading this. Please send some Spike 80 this way so I can finally kill off that holly bush that rears it's ugly sprouts every year in my landscaping. I've tried everything but it keeps coming back.

Aside from the Barners whining about someone poisoning their old-ass trees, the other big news yesterday dealt with the hiring of a new coach for our defensive staff. On Twitter yesterday there were several "knock out" lines being thrown around regarding who the new coach might be...

...this of course led ME to believe the Dawgs were going to hire... 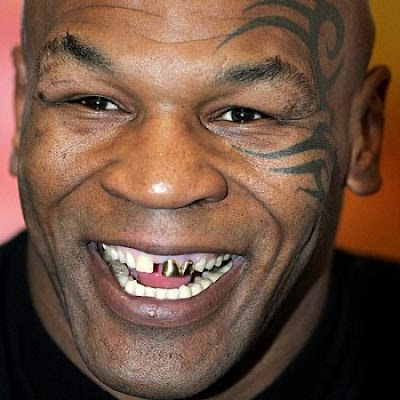 ...unfortunately, Iron Mike was NOT the hire our friends at UGASports.com were referencing. Looks like Todd Grantham landed a guy actually capable of coaching and not just a former-boxer-turned-actor-slash-Phil-Collins-enthusiast who will scare the hell out of our players into making plays.

So allow myself to welcome Kirk Olivadotti to our Coaching Staff. I always love bringing NFL experience down to the college level because my assumption is the kids you're coaching respect where you've been and trust your advice to get them there as well. I shouldn't have gotten my future hopes up to purchase a noble-looking, Irk Russell-esq portrait of Mike Tyson with blood running down his chin...but that falls on me, not Coach Olivadotti.

I'm making the same yearly mistake of getting my hopes WAAAAAY to high on the Dawgs, but all signs are pointing to a solid foundation for the 2011 season. I shouldn't assume 2010 is in the distant past, but we gotta move on and drink that memory away. There's a lot to be excited about for our defense this year, but I'm most pumped to see Big John Jenkins (6'4", 340 lbs) going nose-to-nose with Boise States' Center Thomas Byrd (5'11", 281 lbs). Here's hoping for a massacre in the Dome September 3rd...Lord knows both the fan-base AND Coach Richt need a big win.

While I wasn't blogging I happened to notice I crossed the threshold of 150,000 hits.

Thanks for your support during busy work season (aka slow blogging season). Hope to have a season worth writing about this year.

GO DAWGS!
Posted by Mackie at 1:51 PM No comments:

I hope it's not her Favorite Things episode, I don't want every other school to have their own Ray Drew at DE.
Posted by Mackie at 8:29 AM No comments:

Your move, Aaron Murray. (I think he should film his video set to the music of The Clash's "Straight to Hell" as a rebuttal to M.I.A.'s "Paper Planes" sampling) 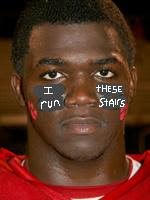 If the rumors are true that Washaun was just being a punk with an attitude, I really hope he gets his act together. It's beginning to look like Caleb King was feeding his homework to UGA VIII and we'll need a veteran RB out on the field this Fall.

We're all pumped about Isaiah Crowell getting some carries, but in addition to him Ken Malcolm and Carlton (Banks) Thomas would be our only other options if Caleb flunks and Washaun decides he's more important than the team he plays for. Malcolm is a question mark, Thomas is undersized, and we're looking at a true freshman to be our own Marcus Lattimore. I'm glad to have him, but lets keep the horse before the cart.

Last season I had no faith in our running game. I wanted fresh legs to play because our corp was NOT getting it done. I had high hopes after watching Washaun run all over Georgia Tech in 2009, but he started to buy into his own hype and he's looked like a thug ever since. I hope the new S&C program teaches him some humility and gets him prepared to be a leader for these new guys. Otherwise keeping Ealey around to "mentor" highly touted freshmen is a recipe for disaster.

For Coach Richt's own good, here's hoping for an off-season where our players don't attempt to emerge from any alleys. Go Dawgs!
Posted by Mackie at 9:43 AM No comments: