If I have to hear another Georgia fan telling me I picked a bad year to go to my first Cocktail Party I'm going to start handing out kicks to the sac like it's already Halloween. 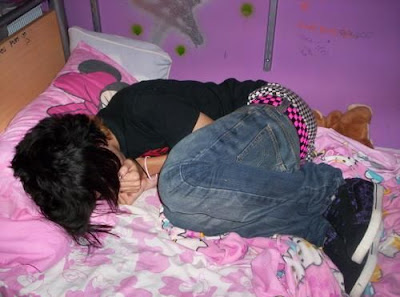 I know cautious optimism is the best route, especially when playing the #1 team in the country, AND it being a series we haven't dominated in QUITE A WHILE. But for the most part you guys are comparing the Cocktail Party to forgetting your "safeword" (oh make it stop!)

Did anyone think Florida State would beat BYU? Did anyone think Junior had a shot of even keeping it close last weekend? Was it over when the Germans bombed Pearl Harbor?

We play the games for a reason and I'm not assuming we'll win but I can point directly at 3 SEC games the Gators could have lost. Georgia will have to play loose, play consistent(ly good), and play with some balls, but we've got as good a shot as any to shock the world this weekend.

Poo poo it all you want Emo Dawgs, but we've got nothing to lose and the Gators haven't been as good as advertised. They'll get 4 fresh defensemen back from injury, but our players are so focused on this game they have resorted to ignoring the laws of man and traffic.

I've got a $50 bottle of booze riding on this game due to a bet I made 3 years ago and I'm not willing to let go of it without a fight. So hunker down you hairy Dawgs! Lets send "The Greatest Player of Our Era" into the CFL next year with a 1 and 2 record as a starter against his biggest SEC rival!

See you in Jacksonville tomorrow and keep a cold one in the cooler for me because I'll be making my rounds. For all the Dawgs with puppies who couldn't miss Halloween I understand. All I ask is you DVR the evening news Saturday to catch my mugshot, because as Munson said it best, "MAN, is there gonna be some property destroyed tonight!"

Last year I had a blast carving the Knowshon pumpkin. I asked for suggestions this year, but my talent level is somewhere slightly less than "A ref with his head in his ass" and "Two thumbs up Willie" Unfortunately outside of AJ Green saving our collective tails week-in and week-out, there haven't been too many memorable moments captured in photograph...so I figured I would turn back the clock this year. 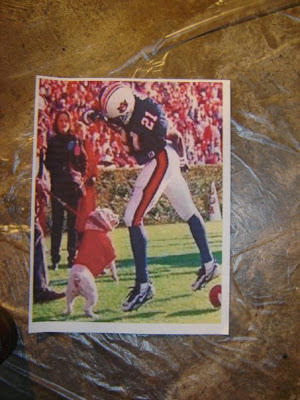 Step 2: Tape it down and use a nail to outline the graphic puncturing the skin JUST ENOUGH to leave an outline... 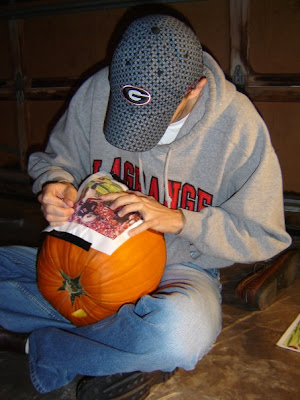 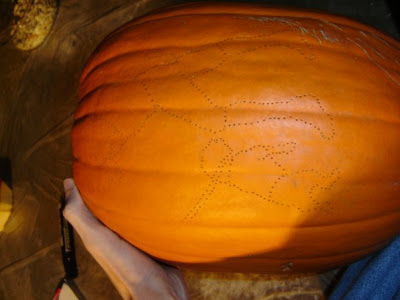 Step 4: Use a rotary tool to scrape around the punctured outline of your pumpkin graphic. I'd suggest using eye protection because after you're done there will be so much pumpkin shard slung at your face you'll look more orange than Sinbad. 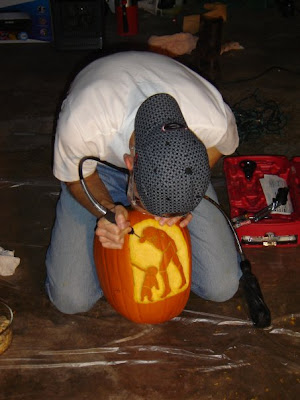 Step 5: Make sure if you use a candle to cut enough ventilation (because technically you haven't opened any holes, you've only carved the skin). 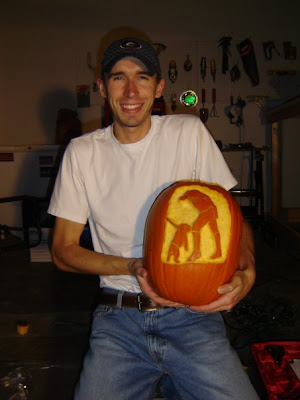 Step 6: If you don't think a candle will be bright enough, I decided to cut a gap in the back and use a Maglite instead. 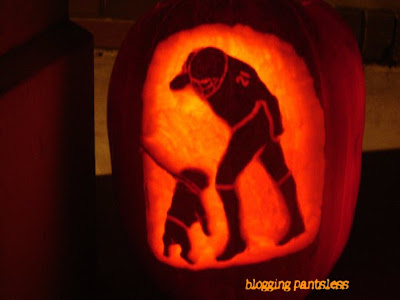 Step 7: Hang a sign by your front door that reads... 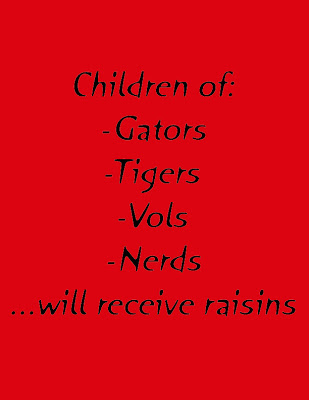 Happy Halloween! Go Dawgs!
Posted by Mackie at 7:13 AM 6 comments:

Labels: DAWGS, holidays, no one looks good in orange 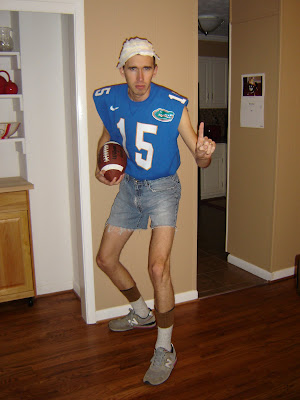 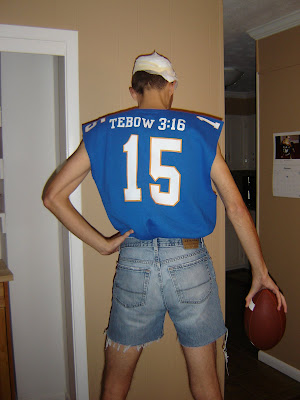 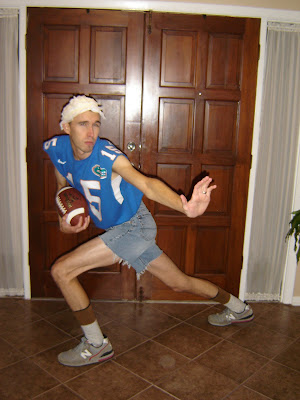 So I went dressed as Concussion Tebow for my church's Trunk or Treat yesterday. Overall I'd say it slayed. I only got called sacrilegious by one guy (who was an older Gator anyway) but he might have been referring to a testicle that may have popped out as I bent over to tie my shoe.

I got numerous compliments especially from a little kid who yelled out "Tebow wears jean shorts!" when he came to my truck. BTW any kid who yells anti-Florida rhetoric will get extra candy and bonus points from me.

The best part of the day was when a lady came up and said, "Mackie I thought you were a Georgia fan?" Apparently my costume was SO GOOD, she wasn't able to tell the difference between a Bulldog mocking the stereotype of Tim Tebow...and a real Florida fan.

Think of that when you dress like a zombie and don't hear "I didn't know you were the living dead?!?"

Finally to wrap this up, I wanted to let you know not a single penny went toward Florida Gator merchandise. I bought a plain blue sweatshirt from Wal-Mart, cut the sleeves off, and used iron-on graphics I printed off the interwebs. The jorts were made from blue jeans I had from highschool (plus a few washings to get the fray just right).

The only thing I lacked was a surgeon's mask and little bits of Phillipeno foreskin scattered about my jersey...then again, it's football season and it's hard to break away from not actually breaking Herschel Walker's record.
Posted by Mackie at 7:25 AM 5 comments:

...I believe this says it all.

After seeing how we played Tennessee last weekend which of these, not named Tennessee Tech, look like a sure-thing?

Redemption bonus: Win on Halloween or any game scheduled after Thanksgiving and I'll not completely banish this season from my memory.
Posted by Mackie at 10:21 AM 2 comments:

If you remember this post from last year, then you already know how serious my wife and I take our pumpkin carving.

I haven't hit a wall with my blog but work is at a very pivotal point. Right now if I play my cards right I could land myself in a good position financially. Therefore I'm taking my job very seriously which in turn means the posting has lacked creativity and enthusiasm...whoopsie.

Also, the rough start for our Dawgs isn't lending itself any real memorable moments that should forever be captured in pumpkin flesh. I've got some serious thinking to do but if you have any grandiose ideas you'd like to share, if I like it I'll immortalize it here Blogging Pantsless.

Throw me some bones, Dawg Nation.
Posted by Mackie at 9:26 AM 4 comments:

Labels: about me, DAWGS, rituals and traditions

I've been soaking in the reaction from last Saturday's game. You'll get no argument from me that Georgia could/should have beat LSU, and for the most part, many of us have come to terms and moved on. 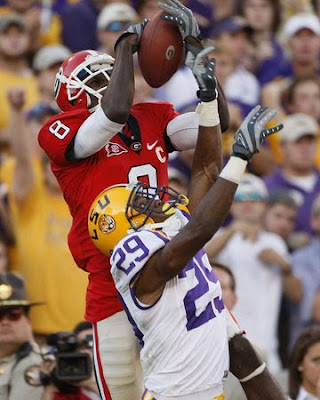 I have nothing new to bring to the table, every argument that could be made has been made against those responsible. But the only thing I offer is a message of patience to the Dawg Nation.

A bitter pill to swallow is the concept of Georgia having a "down year". I know it and you know it, but it's damn near impossible for an SEC team to go completely undefeated. Since I've been born it's only happened 4 times (Alabama '92, Auburn '93, Tennessee '98, and Auburn '04)...but I will readily admit the game has changed a lot since 1982.

So hold your heads high Dawg fans. Many of us found it hard to accept that "analysts" thought Georgia might have a down year after losing 2 early first rounders (that comprised a lot of our team's identity). The thought of not having a (gasp) 10 win season under Mark Richt wasn't an option and we just knew Georgia would prove them wrong.

What has become of these feelings is a recipe of equal parts: poor play calling, poor executing, and just a dash of playing up/down to the level of our opponents. Yeah it sucks having a flag thrown after what could be a game-winning touchdown...but what sucks WAAAAAY more is only having 2 quarters of offense when the other team clearly showed up to play 4. We've had several lucky breaks in our 5 games this year, but I think the luckiest of all came at halftime last Saturday when we went to the locker room only down by 6 points (does the Alabama Blackout game ring a bell?)

You shouldn't be complacent with our team and coaching staff because I think complacency turns you into Vanderbilt. Unless he starts molesting small children* you won't find me calling for Coach Richt's head anytime soon. I was young but I remember Ray Goff and Jim Donnan and do you think for one SECOND they wouldn't have killed for a string of 10 win seasons?!? Obviously changes aren't going to happen mid season and you also worry about how the recruits feel if the guy who talked them into coming to Georgia gets fired. Depending on how the season pans out I think it's reasonable to expect a change in personnel early next Spring, but I doubt you'll find an earth-shattering shake-up in the organization because that's not how Mark Richt leads.

The way we've been playing isn't acceptable, but the games we won and the games we've lost have to be because we can't change the outcome. What we can hope for is our team recognizing mistakes and acting upon them. David Hale already showed us Willie is capable of making adjustments and it showed at the start of the 3rd against LSU. So if you can have me praising Willie Martinez then everyone else should be more than capable of getting their $#!t together.

I don't like losing games but I do like the size of the fight in our Dawgs. They've got the heart to take on giants and if a Tebow-less Gator team can get beaten by LSU we're still in the race for the East. Not to mention it would show we're losing to quality competition which eases the pain ever so slightly.

So leave the pity party early and set your sights on Knoxville. It's a concrete jungle where teeth aren't valued and the women lack chin-lines. Our defense should shine against a Crompton-led offense but Joe & Co. need to get some points on the board with regularity this week. It'll be a 12pm game on the SEC Network for those of us with weak stomachs, but getting a win in Knoxville would go a long way toward lifting our spirits and putting yet another nail in the coffin that is Tennessee's football season.

It hasn't been a dream season so far but we're a long way from out of this thing. Any wins over Tennessee, Florida (it's possible), Auburn, and Tech are always fun and I'm still waiting for a quality win to make an illegal highlight video. We almost had it against LSU, but I've got high hopes for us in Tennessee. Plus another loss for the Volunteers means a great addition for your middle schooler's Summer Reading List in 2010. 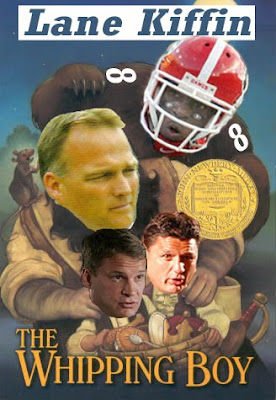 A bit of a stretch, but I'll take the laughs where I can get them.


*just to clarify I don't believe Coach Richt would ever molest children or do anything so heinous he loses his job and causes a media scandal. Tebow might be the second coming, but last time I check the Bible had multiple Timothy's but only one Mark...BOOM, roasted.
Posted by Mackie at 8:23 AM 3 comments: