A Brush With Obesity

So today I had this "great" idea.

Monday, April 12th marked the official unveiling of the KFC dream sandwich, The Double Down. Also, I've lived in the Marietta area most of my life and not once have I ever actually eaten at The Big Chicken (Its been one of those places I drive by but never actually stop...in Auburn, AL they call this "church"). The stars aligned and it only made sense to kill two birds with one stone.

Follow me as I take you on a trip down dietary Hell. 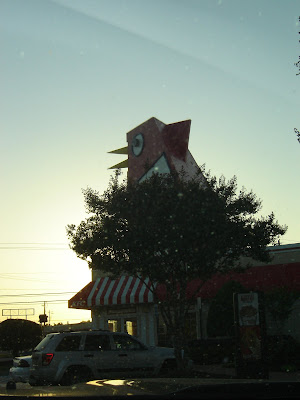 There she is, rising like a Phoenix from the Arizona. 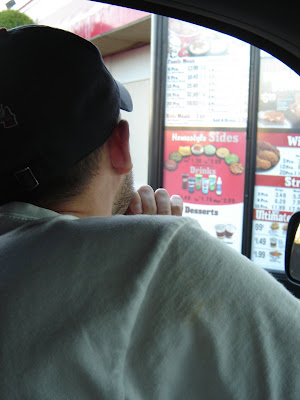 Hmmm...I should probably go ahead and tell you I can count my total trips to KFC in the last decade on Lance Armstrong's testicles. 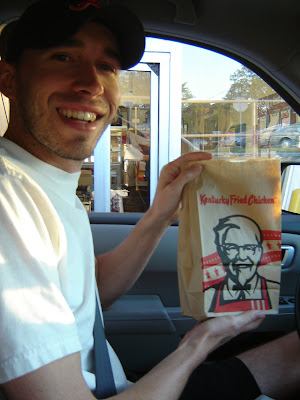 I am officially the proud owner of 1 KFC Double Down "sandwich". 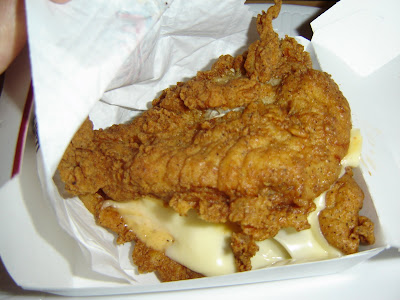 So here it is. A bacon & cheese sandwich held together by 2 fried chicken "buns". 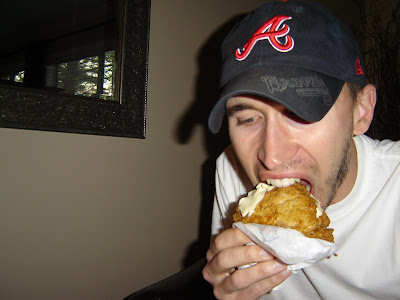 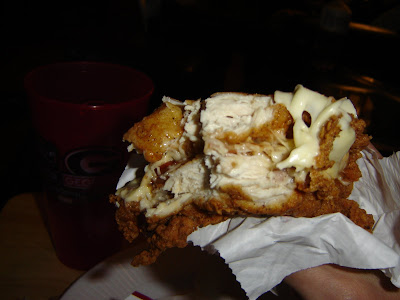 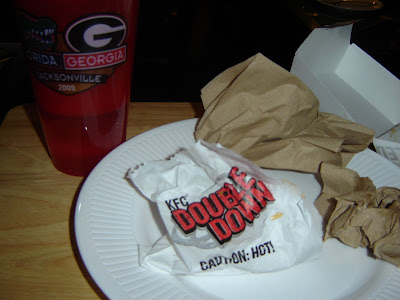 FINAL VERDICT:
Patton Oswalt once referred to KFC's Famous Bowl's as "Failure Bowls". I will hereby refer to this beast as a Failure Sandwich. Why? Because I feel like Hell right now. The damned thing was salty, heavy, and 100% vegetable free...unless the USDA convinced you that condiments are a vegetable, then you got your daily serving of Colonel's Sauce. Seriously would it have killed you to put a tomato or a pickle on this thing?!?

I'm not a health-nut by any stretch of the imagination. I can't eat my wife's Kashi cereal without wanting to empty the hole-punch into the bowl to give it some taste. But if you find yourself able to eat one of these on a regular basis, chances are you either have a Dale Earnhardt tattoo or are wearing an over-sized Tweetie Bird t-shirt. Diabetes are in your not-too-distant future and your long hair compliments your red neck.

Now if you'll excuse me I'm going to go fix myself a Lipitor and Maker's Mark...then call it a night.
Posted by Mackie at 8:16 PM 8 comments:

Labels: about me, dieing hurts, food

So if you'll notice in that handy-dandy little box, top-right, you'll see I'm approaching my 100,000th hit. Amazingly the last 500 have come this week when I haven't posted anything, so thanks for the visits, suckers.

Next week, I'm taking a little vacation, and when I get back home get back to work and clear the piles of work that mounted during my absence there is probably going to be some BIG news I'll be sharing...maybe. My fear of commitment may have me by the balls, I don't know yet.

Either way, this is a huge milestone for me. Thanks to the few who read BloggingPantsless regularly even when I'm spotty on my posting. Also, a special thanks to my wife who has clicked refresh 99,000 times in order to get my sitemeter up. HOOTIE HOO!

Enjoy G-Day, Playaz and Playastresses...we'll see you next week!
Posted by Mackie at 11:51 AM 1 comment:

Yes, it's still technically a Spring Training game, but to pro's are back in town.

The Braves are back at Turner Field and tonight we're taking on the Chicago White Stockings.

The game is at 7:05pm and tickets are starting at $5. If you're bored and feel like going downtown to cheer on the hometeam, you can't beat that deal. Also, it gives you a chance to see former Bulldog Gordon Beckham (who is the most talented $400,000 player on the White Sox Roster). 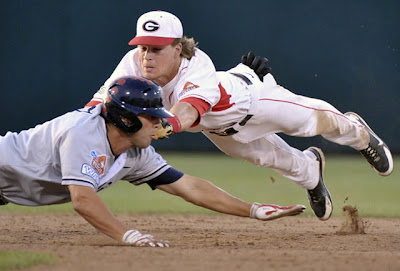 Labels: DAWGS, have you seen my baseball, professionals

...yep, they done lost their minds.

My wife owns a Fort Knox-size vault of criticism for my desire to name our spawn Herschel Munson Alicious (should my wife eventually grow to see me as a suitable procreator).

But until that day comes, the Georgia fan-base will always have THIS to hang over the Alabama fan-base.

This isn't naming your dog, "Dooley" or "Loren"...this is the Alabama version of some nutjob actually naming their kid "Georgia Bulldog Smith".

If I've ever wanted a child to rebel against their parents, this is it. Dear Almighty Creator, please let this kid grow up to be a Plainsman/Tiger/War Eagle...that would be divine. 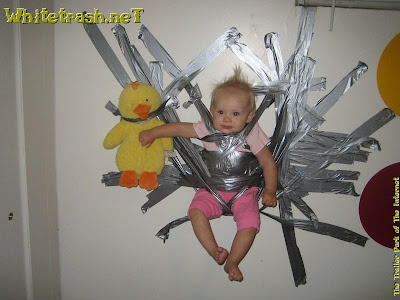 Perhaps he could one day grow up to kick Bo Jackson JerdenHayre's ass (pictured above, hanging in the homemade Jumparoo!)
Posted by Mackie at 4:46 PM 1 comment:

I absolutely hate April Fools Day. The pessimist in me refers to April 2nd as "HOLY S#$% HE WAS ACTUALLY IN A FATAL CAR ACCIDENT?!?! Day".

That being said, the humorist in me has always had an affinity for great pranks. If you've ever seen College Humor's Prank Wars, #8 is clearly the front-runner so far.

Enjoy.
Posted by Mackie at 9:45 AM No comments:

Labels: about me, pranks 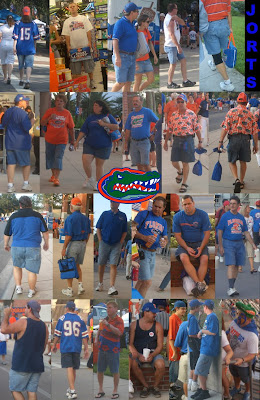 image courtesy of Gator Tailgating.
Posted by Mackie at 8:28 AM 1 comment: