Saturday Morning: A Day of Ritual - Round Duex

I promised you some pretty weird stuff. Not 2 girls 1 cup weird, just strange like when your farts smell like Krystal cheeseburgers and you haven't eaten Krystals since last Monday kind of weird.

Picking up where we left off yesterday...

#4. The Changing of the Flags Ceremony. 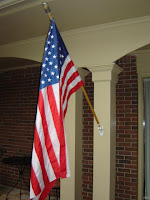 This is my house Monday-Friday. 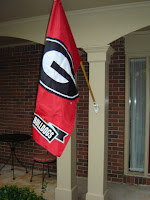 This is my house Saturday-Sunday.

No disrespect to Uncle Sam, but the weekend is where we air out the UGA flag in the Mackalicious household. Saturday morning, after I've donned my Saturday best I go to the front closet and pull out the Georgia flag. I take it outside, change it out with the Stars & Stripes, then before putting it back in the holder I wave the ever-lovin' shart outta' it on the front porch. This does 2 things, #1 it shakes the wrinkles out, #2 it lets the neighborhood know that those who bleed red & black are welcome here, all others can sit & spin Terence Moore style.

Alright, lets just get this out on the table. I have two dogs, they both happen to be Chihuahuas. Laugh it up, but chances are I love my dogs more than I like any of your family members so eat it. Below is their Easter picture, it is by the very (male) definition of the word, queer. But I'm not making excuses, I approve of this action because it makes my wife and I smile and I'm told that I like to do it. 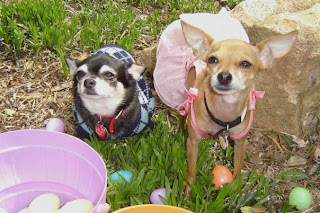 Pepper is on the left, Olive on the right.

Olive was our first dog, I had her in college, we bought her a UGA shirt. 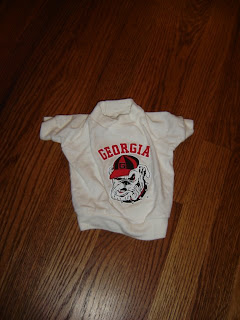 Olive proved to be VERY unlucky when wearing the UGA shirt. To put this into perspective, for the Chick-Fil-A Bowl 2 years ago, Olive wore the UGA shirt for the first 2 quarters...at half-time I made her take it off. So we bought another dog, Pepper. Pepper has a solid record of winning while wearing the shirt, therefore he gets to wear the UGA shirt...Olive doesn't. For one day, my little black chihuahua who likes to poop in the guest bathroom puts on a Georgia t-shirt and becomes the #1 Dawg in the state that isn't named Uga. On walks he gets to pee in the Auburn fan's yard, poop in the Tech fan's yard and he only snaps at the children of the Clemson people down the street. Yep, for a gay little dog, he ain't half bad. 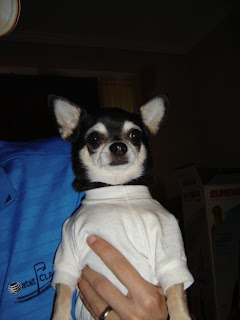 Get to know him, you'll like him, he dresses well, keeps a clean house, and will totally raise the property value in your transitioning neighborhood. 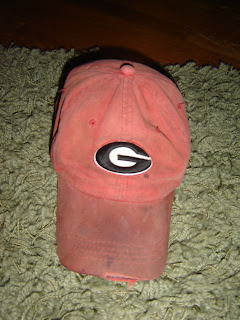 Every Saturday morning the Dawgs are playing, this hat gets thrown into the creek. 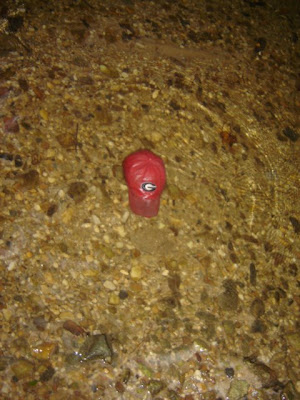 I don't remember exactly why I started doing this, and I won't reveal which East Cobb creek it is that flows lucky water in case there are any spies reading who want to steal the secrets of winning. This is really all I remember...

Matthew Stafford's freshman year after we lost to Kentucky I decided my "lucky hat" (shown above) had run out of luck and I bought my current "Gameday hat" to circumvent the loss. That was the week before we played Auburn. The following Saturday I wore my old lucky hat outside to take the dogs out. While I was out there I walked down the hill to the creek. I thought about the loss the previous week and I ripped the old worn out hat off my hat and slammed it down into the creek thinking if we can't beat Kentucky, we sure as hell ain't gonna beat Auburn.

So I picked my hat up out of the creek water, and hung it up to dry outside, went inside and watched football all day. Georgia won and I've been doing it every week since. Before I left to go to the Sugar Bowl in January, I went to the creek, got a cup of water out and left a note for my wife to pour it over my lucky red hat before the Sugar Bowl was to air. She did it, Georgia won. I know it's silly, I don't question it, I just do it and shoot a bird at anyone who makes fun of me.

#7. The Lucky Yankee Candle.
The Yankees burned my state, so I burn their candle. It's red and smells like like Pomegranate...and victory! 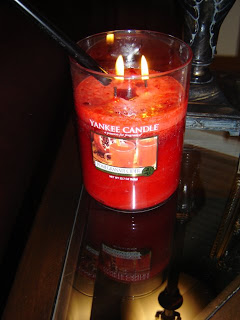 #8. Something Old / Something New.
Just like most all other Dawg fans with a ceramic bulldog, I turn it to face Athens on Gameday. But next to it on my shelf I placed the Larry Munson talking bobblehead I purchased from The Georgia Sports Blog's store link. I plan on incorporating that in some way. Perhaps have it facing North-East just like the real Larry...but I haven't worked that out yet. 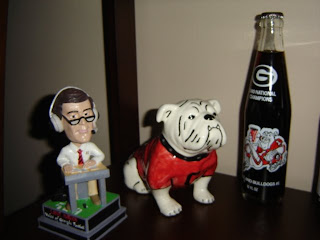 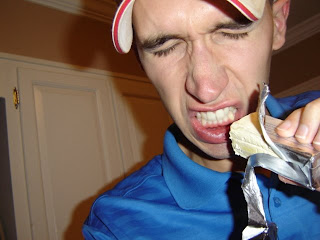 Every Saturday before the Georgia game comes on, I eat an entire stick of butter.

...okay I made that last one up, but at this point I feel like I could have thrown that and eating the soul of a child onto the list and you wouldn't have thought I was much stranger.

Either way, I hope this helps you come to terms with your own ritual you perform before gametime. I honestly don't think I could reveal much more about myself that would be as embarrassing as this but shame has never been my strong-suit.
Posted by Mackie at 6:59 AM

Labels: about me, DAWGS, football, HAAAAAY, rituals and traditions, strange but true

Wow, I have tears from laughing so hard. Olive and Pepper are so cute, and we all know that Olive would rather wear her Bama shirt than the Georgia one any day of the week.

Wow...the hat in the creek is classic! It's amazing how an accident like that can lead to the sole reason UGA finishes #2 the next season and then opens up #1 the next season. DON'T EVER STOP. I believe in stuff like this. Nice work by the wife, the cup of creek water and the Sugar Bowl btw.

Now I just wonder what I did wrong against South Carolina and Tennessee last year?!? Perhaps not having the Larry Munson bobblehead back then is what lead to the 2 losses. We should be good this year though, I've got us covered.

Also, I have to say that the look on Pepper's face in his t-shirt photo is priceless... half fear, half confusion... all Pepper.

Dude, you rival no other.

Damn that was funny.

yeah, i was going to ask...rituals are no longer lucky after we lose.


For example, I went through 3 pairs of lucky boxers last year (or maybe more during the bama game because of Tripp Chandler ;)).

My silver britches (grey khakis) were also destroyed after South Cakalaka (even though they knocked off 3 straight ranked teams to close out 06).