Since Mark Richt took over as head coach of the Dawgs in 2001 we have only won 2 of the 7 Cocktail Parties.

Of the 5 we've lost, the average defeat was by exactly 7 points.
Of the 2 we've won, the average victory was by 9.5 points.

This is interesting to me if only because we will be know for our offensive firepower this year. Averaging a 1 TD and PAT yearly loss to the Gaytors doesn't seem like that big of a deal with the guys we've got controlling the ball this season.

On the other hand, when we've won it's been by 9.5 which would mean Team Tebow would need either their defense to step up and keep the game within a TDs value, or their offense is gonna have to produce and produce quick.

Of course these are only numbers and don't really have any relevance to what will happen on November 1st in Jacksonville...but it's fun to look at.

Our average bowl win was by 12.888 points in those 9 victories.
Of our 2 losses (the '01 Music City Bowl against Boston College and the '05 Splenda Bowl against West Virginia) our average loss was by 3.5 points. Regardless of what the score was after the 1st half of the Mountaineers game, the final loss was by 3 and if Dick Rod hadn't gone for it on 4th down we would have tied it...but I'm not bitter...I promise. 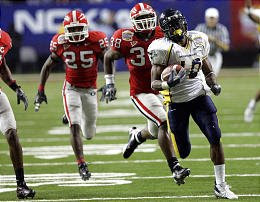 When it's all said and done, we've had a pretty fine run these last 10 years. This season promises to be as entertaining as any, especially considering how the media has been pulling our meat. Keep the faith Dawg fans, we've got a potential Heisman winner, a quarterback with ALOT to prove, the unveiling of a new mascot, the finest coach to never win a National Championship, and most importantly Larry Munson calling the play-by-play.

Labels: DAWGS, football, GAYTORS, math the other white meat, rivals, the legend that is Larry Munson