10 things that look good to me: Nerd Practice Edition

Being the avid UGA fan that I am, I took a few exerpts from an AJC article about how Tech's first practice went yesterday.


#1 "...the offense looked brilliant at times, but more often than not, it looked like they were still learning."

#2 "Presumed starting quarterback Josh Nesbitt overthrew receivers on deep patterns, and occasionally put too much air under the ball, allowing a cornerback to recover and make a play."

#3 "Freshman Jaybo Shaw, presumably competing for the No. 2 job, worked mostly with the No. 2 offense, and didn't look particularly sharp."

#5 "None of the others - Tevin Washington, Bryce Dykes or Calvin Booker stood out either."

#6 "There was one series where Shaw mishandled the snap."

#9 "...Booker underthrew the ball and was picked off."

#10 "Good and bad," is how coach Paul Johnson called the morning practice and the play of his quarterbacks. "There's a lot of work to do and some young guys are going to have to push through."

Oh what the heck, here's one more thing that looks good to me... 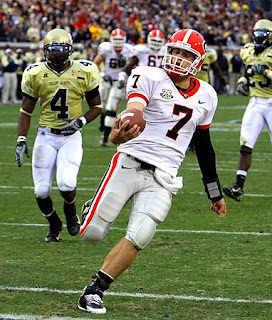 ...and something that looks REALLLLLLLLLY bad to me... 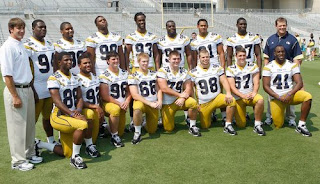 And, my God - those uiformas are hideous. LMAO!!!

Apparently my laughter hindered my ability to spell...meant to say UNIFORMS.

Somehow, fight on you mustard britches doesn't really have the same ring to it. Oh well, good thing it's a dawg thing anyway, the nerds wouldn't understand.

Don't worry about the spelling, I thought you were a classy latino for a second...then I realized you were a white girl commenting on a post that didn't offer spellcheck :) Thanks for stopping by and commenting!