If you ever look through Yahoo Sports' college football section each day they headline the Rivals.com ranking countdown. Rivals.com actually has all 120 schools listed but I'm only going to cover the SEC schools listed in the top 30.

They're currently at number 4 and Georgia still isn't listed which means, just like the rest of the Bulldog Nation, Rivals.com has some large expectations for the Dawgs this year. I'm going to start with the bottom 3 SEC schools mentioned in the top 30 countdown, once we see where Georgia falls I'll pick up with the remaining 4 including LSU, Auburn, and Florida.

Of those 30 the lowest ranked is Alabama at #29. I've watched as John Parker Wilson inherited the QB position from Brodie Croyle of whom I was none too impressed. Honestly, I think Alabama's return to greatness will be delayed yet another season because of JPW's return as signal caller. I don't follow Saban's recruiting like I do Coach Mark Richt's but until the Crimson Tide get a competent QB under center they won't be beating Auburn anytime soon much less playing in the SEC Championship. I will give him credit for keeping a level head in order to tie the Georgia game up last year, but I will also put the loss to LSU squarely on his shoulders (perhaps with a little bit of shared-weight on the OC).

Great hair gets you chicks, not victories over Auburn, PRIORITIZE D@MM1T!.


Next is South Carolina coming in at #27. Much like Nick Saban's situation, I don't think the Gamecocks will be a real serious threat until each coach is playing with his own chosen players (under these same guidelines I'm none too impressed with Urban Meyer's National Championship with Ron Zook's recruits, but that's for another post at another time). Yeah they'll have a great defense returning with Jasper Brinkley (assuming he keeps his knee in one piece), but without an offense with some fire-power I don't have much stock in the cocks. Now they just need the spraypaint reading "Brian Van Gorder was here" cleaned off the locker room wall and they'll be in good shape for the 2009 season. 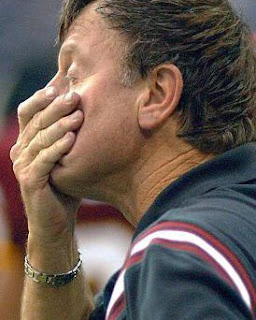 Pictured: Steve Spurrier (not pictured: visor on the ground)


We now take a big jump to #19 where the Volunteers from the School of Hard Knox sit. If anyone had lady luck laughing out loud last year it was Tennessee as they rode a thin white line to the SEC Championship. Seeing Kentucky fall apart in overtime really put a damper on the Dawg's victory over Georgia Tech on 2007. Led by senior tailback Arian Foster the Volunteers hope to have a repeat season as SEC East champs, but that's a pretty tall order considering who they've got to beat to get there. Also the University of Tennessee has issued a release this season requesting fans no long bring signs that reference the "Arian Nation" in support of their star tailback. The 6'1" power-running Foster needs but 695 yds to become Tennessee's all-time leading rusher, a total UGA's Knowshon Moreno hopes to rack up after 4 carries...because he's just that good. 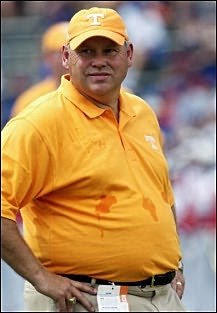 I can has cheezburger? 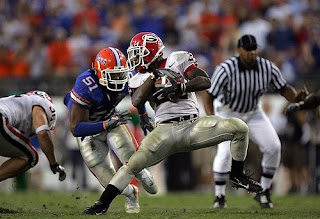 No Phillip, you cannot have the cheeseburger.

That's all for now because a big fat stack of work landed in my lap, like I said I'll conclude this when Georgia is finally ranked by Rivals.com (right now my assumption is #2 scheduled for Wednesday...but I'll gladly take a Thursday post if I must).

Ok, so I found Blogging Pantsless just the other day. Well, I just spent the last hour or two addictivly (is that a word?) reading ALL of your posts. Holy crap there is some great stuff on here. I'm a fan. Keep up the good work.

Thanks man I appreciate it. I'll continue to try and bring everyone the most biased & BS filled coverage of sporting news/opinion I can!

Uh, actually, it's impossibly to run for more than 400 yards on four offensive plays. You know, I'm starting to think that you make up some of the stuff that goes on this blog...

Is it impossibly for Gators to use proper grammer and get jokes?

OOooOoOooOooooooo. I love you and desperately want to make love to a school boy.