well...I figured it out.

Earlier this morning I was having trouble figuring out who to give the (Sammy) "Hagar Award for Outstanding Achievement in the Field of Screwing Things Up for the Rest of Us", and I finally figured it out. 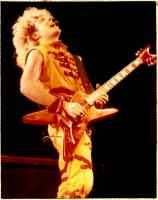 Yes Officer, that is definately the woman I saw kill Van Halen.


I love movies. Sometimes I'm even willing to give movies I don't think I'll like a shot, sometimes. Imagine if you will, you are a top-dog at Disney several months ago. In the near future your Pixar studios will release WALL-E which you know is going to make you millions. As you lean back in your office chair and light your cigar with a $100 bill, a lowly employee enters your office to pitch an idea to you.

You hear him out, thank the guy, send him out, then immediately proceed to call your superior telling him you've got an idea that is nothing less than solid gold. He gives you funding, you pass it on to production and tell them to make you this movie.


Someone is responsible for this...whomever it is, you just got yourself a Hagar Award.

My beef with Beverly Hills Chihuahua is the sheer un-originality of the idea. I know it's not targeted to me, but geez, if I had kids I don't think I'd take them to see this movie. Perhaps this is why I'm not in Hollywood because I don't understand, but I'll take a movie based on the life & times of one Larry Munson in the near future if they want my ideas.

Until then, congratulation "Go Ahead" guy at Disney, you're a douche, and you just won yourself the Hagar Award!

I personally think you should give the award to Jesse Jackson.(every week would be fine with me) I mean, he did name his kid Race Card.

Yeah, I'd thought about that but I wanted to stay away from the whole political thing. Plus if I talked down to him he'd cut my nuts off.