For those who regularly stop by, you may remember a friend of mine a few posts ago I lovingly referred to as Gayman.

As I said then, Gayman is a grad-student at the University of Florida and we have a little running bet contingent on whether UGA wins 1 of the next 2 Cocktail Parties.

A couple of weeks ago Gayman had his birthday and his girlfriend (...I know that defeats the purpose of his character name) gave me a call recruiting help for his present. It took me long enough but I finally got everything together as we had discussed.

Last week as I had everything ready to ship off, for craps & giggles I ran over to Wal-Mart and picked out the cheapest...I mean, most flattering pair of jean shorts $8.50 could buy. I threw them in the box with his other stuff and mailed them out. 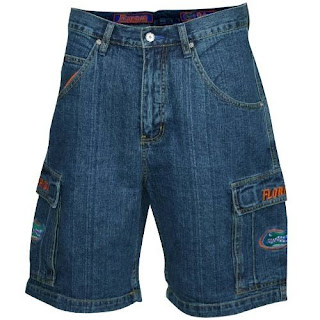 Jorts, they're not just for gameday anymore. Now available in CARGO!

I received a call yesterday from Gayman saying he'd got our package. He also threatened to wear his newest pair of jean shorts next time he came to visit, which wouldn't really bother me that much, after all I've got a nice pair of red shorts I've been saving for my next trip to Gaynesville. The only problem is I bought a size I thought he wore, but Gayman has been working out trying to impress all the other dudes at the gym so he should be congratulated on his new smaller waistline.

Anyway, I know this is a pretty random post but I wanted to share a story about giving a Gator jorts for his birthday. I hope it warmed your heart as it did mine.
Posted by Mackie at 7:32 AM

You're not supposed to tell me how much my jorts cost if they're a present.

It's alright, I left the tag on so you could take them back to exchange for a lighter shade of stone-wash if you wanted.