A pretty lazy weekend was just what I needed and just what I got. The only thing relatively interesting I did was on Saturday between sleeping half the day and eating mexican food WAAAAAY too late was watching a show about Saturdays in the South from RAYCOM. It aired on My ATL which is 813 on Comcast HD and it showcased the following.

1. Tailgating in The Grove at Ole Miss. One of my goals in life is to travel to a UGA away-game at each of the SEC stadiums (though I'll probably have to take my wife see Bama play at The Swamp if I want to go to Gainesville and root against Florida). The one I most look forward to when I'm able to finance this tour would be the Ole Miss game. These fans understand you might not win every game, but you can definitely tailgate the pants off your competition, and honestly, isn't pants-off what this blog is all about?

2. The tradition of Uga the bulldog mascot for the University of Georgia. Nothing really new here, the same story about how Uga I got his start, II got 2 SEC Titles, III got our second National Title, IV went to the Heisman ceremony with Herschel, V was a movie star and tried to cut Robert Baker's nuts off, and how VI had an affinity for co-axle television cables and ended with the best record of them all. Really nothing you missed if you watched UGA and His Family on CSS later Saturday night. 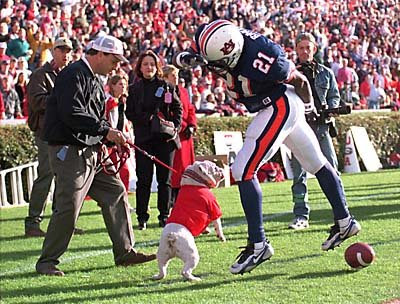 "You see, Baker's been talking down to Dawg fans on faith-based initiatives"
-UGA V

3. The human canvas of Alabama known as Nate Davis. You might know Davis as the guy with the HUGE tattoo of Bear Bryant leaning against a goal-post on his entire back. 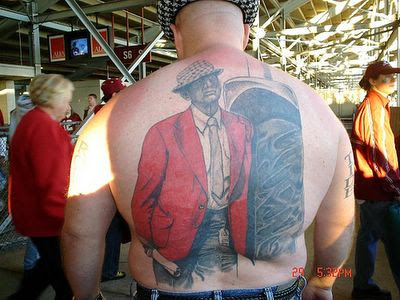 Nate Davis has more than $8,000.00 invested in tattoos honoring the football heritage of the University of Alabama. It is actually an interesting story how he left school, joined the service, finished his time in the service, joined a police department in Georgia, all while wishing he'd still gotten his degree from Alabama. So he left his job, went back to square one, and is in the process of getting his teaching degree from Bama. I don't want to bash on the guy, he's definitely got a lot of heart, but those things are pretty permanent and 8 grand is a lot of money. My guess is a couple thousand more and Daniel Moore will come knocking wanting to immortalize him on the walls of thousands of "Crimson Rooms" across the state.
Posted by Mackie at 8:56 AM