I just want to go on the record and say Five Hour Energy is an incredible invention. 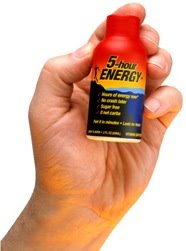 Free advertising from me is the equivalent of an endorsement, but I might not have made it through work Wednesday without this stuff. Following the AC/DC concert I couldn't hear a thing, and I stumbled into the house after midnight (wearing horns) fully prepared to hop into bed. Mrs. Mackalicious was on her game telling me to "Take those stupid horns off" and "Lord, you stink". So I went to bed, and shut my eyes for what seemed like 10-15 seconds and then my alarm went off...and I had to drag my sorry @$$ outta bed.

Work was hell, I had projects to do and wasn't in the mood to do anything but sleep. A mute reminder I'm not in college anymore where I could rock and roll all night and party ev-er-y-day. The concert was awesome and the 50-60 year old guys on stage were rocking like they weren't a day over 25. My problem is I felt like a 50-60 year old and I couldn't sleep it off. So I went to the gas station down the street and picked up a 5 Hour Energy.

If you've never had this stuff it tastes awful, but its only a shot-worth so you can down it quickly. This stuff is 1000% B Vitamins and gives you a boost within 2 minutes. The best part is, unlike Red Bull or Cocaine there isn't a harsh crash when everythings done working. I was right as rain for the rest of the day and got everything I needed done wrapped up.

I guess the only downside was it was mostly vitamin B and not vitamin C because I think I picked up a bug or something at some point. Now I've got lungs full of mucus and can't take a deep breath without coughing up slugs...ugh. Hopefully I can pull another miracle recovery as I did earlier this year when I tried to drink a gallon of OJ in one day while sickly, then 3 days later I was a champ again.

Either way, sorry to be gross but that's why posting has been so infrequent. My original assumption was my sickness was due to football withdrawal...but we all know that's more of a gastro-intestinal thing not so much respiratory. Oh well.

Have a great weekend and enjoy the craptacular bowl games. There really isn't much worth writing about for any of them...that's how awful they will be. But you know we'll still watch them anyway (/sigh).
Posted by Mackie at 6:58 AM

this might be the cure for my late-night Rock Band parties. I've seen this stuff at the store but never tried it, so if you say it works, than I will trust that.