My wife might be the most intelligent person I know. She's a straight shooter who isn't afraid to tell you the truth if you need to hear it. Last night she made a statement encompassing each of the following ingredients:

6. Criticism (which is slightly different from insult)

To make the setting, imagine we are sitting around the living room drinking some spiced tea to warm our spirits.

We discussed our drive to work that morning where she and I had both heard a portion of the same morning radio show. There is a member of said radio show who was known for his work donating sperm to supplement his income. I had heard this person say his last "donation" was rejected, but I left for my office when he was explaining why. Mrs. Mackalicious revealed to me he was diagnosed with Chlamydia and the sperm bank turned him away. She told me how upset he was because he counted on sperm donation for approximately $5,000 of his yearly income.

My jaw hit the floor. I had ZERO idea people got paid that much for sperm donations. The minute my wife saw my wheels turning, she put a stop to it with a quickness. She unleashed this statement which (as mentioned earlier) made me have a great appreciation for the woman she is.

"NO, NO, NO, NO!!! You are NOT going to do that! The only kids running around with 1/2 a brain looking like you are going to be MINE! So don't even think about it!"

If you really think about it, the depth in that statement is mindblowing. My only hope is that someday you, the reader, will be as lucky as I was in finding true love. 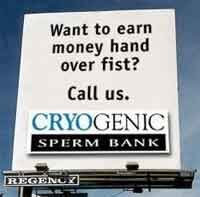 ...but perhaps I should stop finding stuff like this funny first.
Posted by Mackie at 1:55 PM

Labels: about me, dieing hurts, just a thought

That statement came across a little harsh. Oops.

You've got a special woman, that Sweetie.