If you've read my blog for the past year, you know for the most part I'm full of crap and tend to hold little sacred when my foot finds its way out of my mouth. However, when I heard the following story I had one of those moments when you get a lump in your throat and you start to put your own problems into perspective. 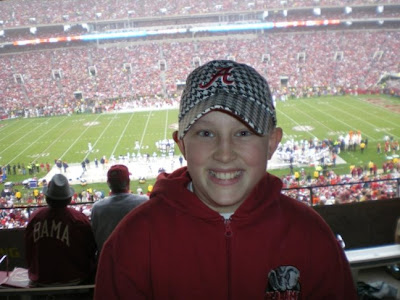 Here is a little bit of information about her.
Her father Gary used to pastor the Baptist Campus Ministry at Jacksonville State University. Her mother passed away in 2007 after a seven year battle with breast cancer. Shortly after that she began having back pain and was diagnosed with Rhabdomyosarcoma...that's cancerous tumors that ravage connective tissue. She is 12 years old, loves Guitar Hero, playing softball, and watching Crimson Tide football.

Earlier in January she went into surgery for a tumor on her spine. From what I know the doctors were able to remove most of it but I don't really know much more about the situation. The relevancy to why a sports blogger would be writing about a little girl with cancer is that last Sunday she got a surprise phone call. I'm assuming it was set up somehow through the Children's Hospital Network, but being that she was a huge Tide fan you can imagine how exciting a phone call from Alabama QB John Parker Wilson would be to a 12 year old girl.

The sad part is she has undergone radiation therapy, chemotherapy, and is currently on medication that makes her terribly nauseous. When JPW called she was feeling terribly sick and wasn't well enough to talk to him. What makes me think highly of Wilson is that he left his cell number with her father Gary and told him to shoot him a text message when she was feeling better and he'd call back.

This isn't anything you heard about in the news, there weren't tv cameras showing Wilson sitting at a desk with a list of sick kid phone numbers. John Parker Wilson did this act on his own time without any type of fanfare and no one would have even heard about it if her father hadn't written about it on her blog (she had a blog she maintained until she wasn't able to, now her father posts status updates). To me that showed a lot of character and I felt the urge to share this story.

Megan's blog can be found at the following link set up by The Caring Bridge.

If you are religious, please keep Megan and her father Gary in your prayers because you know times like this is when people need the most support. If I'm able to find anymore out about Megan's status I will share. Thanks for letting me get a sincere post up here, I promise I'll fall back into character later with posts about how the contestants on The Biggest Loser remind me of Tech's co-eds.
Posted by Mackie at 9:44 AM

Labels: about me, news

JPW - proof that character is defined by what a person does when no one is looking.

Oh my word. That simply breaks my heart. Praying for peace, mercy, and healing for that precious little one.

Bless you JPW - what a sweet, selfless act of kindness & encouragement.

Thanks Mackie for a does of much needed perspective today. I hope you keep us posted on her condition if you can.

Great post Mack! Thanks for sharing that. Fantastic story.

"I have been trying to decide how to share this news, but have found no easy way. What I have known for a while was told to Megan this week—that her cancer appears not to be curable. Having heard the news, Megan has asked her doctor some very pointed questions and received answers. She is dealing with her situation right now."

Just wanted you to know that Megan Brittain died yesterday, June 2, at 4:14 p.m.