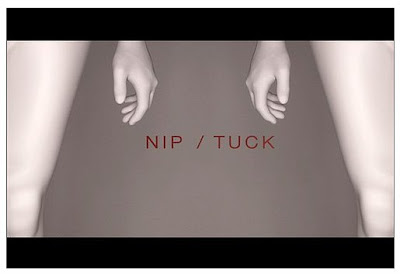 The disturbingly perfect drama returns tonight at 10pm on FX. I don't usually get into many television shows, but I'm on my 4th year of Nip/Tuck. The "Season" coming up is actually the remaining 8 episodes from Season 5. That explains why last year the storyline ended so abruptly. After this year FX has picked up the remaining season which will be split over 2010 and 2011, with creator Ryan Murphy collectively ending the show following the 2011 season (also the 100th episode).

If you've never watched the show I challenge you to watch 2 episodes and then NOT watch the 3rd. It's easy to pick up you just have watch. Though I'm not a fan of the behemoth genre medical dramas have become (Greys, House, ER, Private Practice, I'm sure there are more) Nip/Tuck is much different for me. It's almost absurdly graphic, but doesn't try to pass itself off as a realistic hospital show (they mocked "Greys Anatomy" with their "Hearts & Scalpals" storyline).

I know this isn't a television blog, but every now and then I like to throw in a little personal info about myself, stuff I like, and stuff I think you should too.
Posted by Mackie at 9:28 AM

Labels: about me, coming up, talkin' picture box

I've been a fan for several seasons, but last season creeped me out more than usual.

I'm gonna watch it probably, but while holding onto a bottle of pepto.