Who would have thought the week before the Georgia/Abuurn game the big story would be which school Scout's #1 prospect Derrick Favors will go play basketball?!?

I'll admit I'm as fairweather a UGA basketball fan as there is, but I jumped into the pool neck-deep during the SEC Championship earlier this year. Coach Felton hasn't really impressed many up until that incredible run, but I'm hoping if we land this kid the program can get over the hump to becoming a consistent contender in the NCAA and perhaps develop a solid following.

The comments section of AJC.com's story about Derrick Favors is loaded with Tech nerds trying to persuade Derrick their way, which I'm sure he is taking into consideration when making his decision. For those who don't know, he's between UGA, Tech, NC State, and Memphis. I'm not banking on this kid becoming a Dawg, but as I've said before, Athens being Athens could be a huge part of the decision. Favors is from South Atlanta so Tech might be a little too close to home (I know when I was picking schools I didn't want to be within earshot of my parent's). Memphis is a dump and Raleigh is too close to Mount Pilot where Barney and Gomer went to try and sell Miracle Salve to cure the mange on dogs. Athens is a great college town where there is just enough to do when you want to party, just without all the prostitutes and crack wandering around Tech's campus.

Finally lets look at our coaches.

Coach Felton looks like a cool guy who might throw back a 40oz with you while playing Miles Davis' Kind of Blue. I also assume he likes to play Halo, Madden, and NCAA on X-Box. Probably likes Family Guy, has a Playboy subscription, and wears Busted Tee's when he's off the court. Take notice Derrick, this guy is THE MAN! 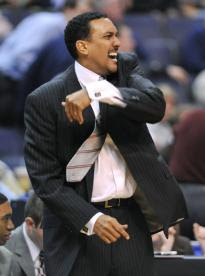 Derrick come here, let me show you this video of a dramatic chipmunk! It's the funniest 4 seconds on the internet I swear, I swear! Richt, cue it up again...AAAAAHAHAHAHAHAHA!!!!!1

On the Tech side of life, you've got Coach Paul Hewitt.

He's most likely into Warcraft and Second Life. Probably drives around in a mid-90's Honda Civic with cloth interior. I assume he would rather watch Battlestar Galactica and listen to Nickleback than go out and grab a beer. Also, I imagine he's into Asian women because that's all he's exposed to. 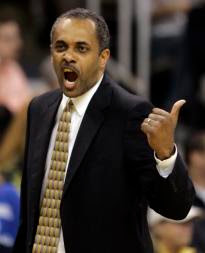 It's only appropriate this file photo reminds me of a freeze frame from...

Who knows, if you're lucky I'll get my act together and post something about the Abuurn game sooner or later!
Posted by Mackie at 7:05 AM