I only caught the last half of the Ball State / Central Michigan game last night (because on Private Practice, Addison was confronting a trifling, good for nothin' type of brother who had 2 wives who were both preggers and I couldn't turn away from that train wreck). It essentially came down to do or die in the 4th quarter for the Chippewas and they weren't able to "do" so they "died".

Great game though, I was really hoping C. Michigan would pull the upset. I always cheer for anyone the Bulldogs play with a few exceptions (said team must be outside of our conference division during regular season play OR our division rivals during bowl season). LeFevour did what LeFevour does and passed for 345 yards and for a while the Chippewas were essentially going tit for tat with the Cards.

If you watched the last touchdown drive by Ball State, you may have been asking yourself, "Who is that really short running back making the Chippewas defense look like Willie Martinez is still coaching there?"

That player and undoubtedly their most powerful weapon was Ball State running back, Emmanuel Lewis. 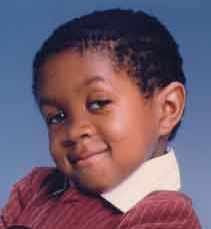 At 5'6" and 184 (wet) lbs, Webster put up 177 yds on 28 carries but if you saw the last TD drive by Ball State you would have seen Mr. Popadopalous average 10.5 yards per carry on 6 downs. It was quite frustrating to watch because I wanted the Chippewas to win, but you had to be in awe of this kid. What he would do is run directly at the big mass of linemen at the line of scrimmage, then shoot out to the side after the defense lost sight of him (and at 5'6" it wasn't hard to do).

Capping the drive off with a touchdown pass put Central Michigan on the spot to score or lose, and their return drive fell short after not converting a 4th and 18 in Cardinal territory.

But I just wanted everyone who missed the game to know, that Emmanuel Lewis is doing great at Ball St. Every now and then his teammates bring up the whole dancing with Michael Jackson thing, but for the most part they're just kidding...


(Even in pads and gear, Lewis looks just as short on the gridiron)

However, I do recall an on-campus incident where Lewis went to sleep with his model rocket kit in the dorm room closet which caught fire and burned his dorm down. But Emmanuel came clean to his parents and the Ball State Dean of Students and was forgiven because he was honest about it. Tears were shed, and people were disappointed, but I think we all learned an important lesson about storing flammable materials and being honest.

(Alright, that's the end of my schpele. If you haven't caught on yet, the joke involved the Cardinals really short RB Miquale Lewis and I was using my vast knowledge of corny 80's sitcoms to connect a short black guy with the last name "Lewis" to the show Webster. Oh well, screw you, I thought it was funny.)
Posted by Mackie at 7:32 AM

Labels: football, it's not funny if you have to explain it, The 80's

I got it, and agree that game was actually a good one. I will have to disagree with the commercials about the MAC being the next great conference. That Michael Jackson video is a little creepy when he is holding Emanuel Lewis like a baby.

Micheal Jackson dancing with a hugging a little boy seemed so innocent in the 80s.

You had me at Emmanuel Lewis.