...no Georgia, I will not quit blogging and come play defense for you.

"Robey is ~5'7" and 160 lbs. Smaller than Mikey Henderson. The idea that he'd play defense for us was idiotic. Problem solved."

This is regarding the statement from Frostproof High School's AD that Nickell Robey probably ain't coming to Georgia.

Though the article puts Robey at 5'8" 175 lbs, I'm more inclined to believe these details are inflated a bit and Paul is closer to being right. Why do I feel the need to post about this? Well, if Mr. Westerdawg is correct UGA just lost a DEFENSIVE RECRUIT of Willie Martinez which weighs as much as I do AND is 9" shorter than me!

Care to visually put this into perspective? 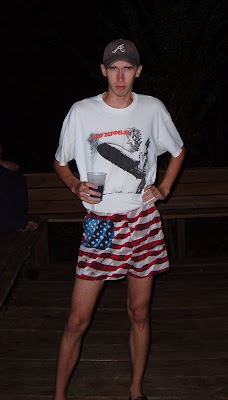 A (presumably) faster, shorter, and less patriotic version of this character would have been running around in your secondary next year.

THANK YOU, COACH GRANTHAM...THANK YOU!

UPDATE...yes, that quickly.
Ally states Robey is saying his coach is wrong and might still honor his verbal to Georgia. That being said, I'm keeping the picture up because I like the way the running shorts accentuate my leg-definition (or lack there-of).
Posted by Mackie at 12:06 PM

Okay, you're seriously cracking me up here! Gotta love the shorts, I feel like I should salute you or something.