That same team later went on to beat LSU and Auburn by a grand total of 4 points...combined...for both games.

I think we'll all drink to LSU and Auburn being down on their luck in 2008...but being able to rub it in Alabama's face that you beat ULM by 1 isn't really getting the praise piled on you.

So what the hell are we supposed to make out of Arkansas?!?
Here's something to make of it, the first loss of our 2009 football season.

To put this claim into perspective I'll share a list of other things I'm equally as confident in:

-Jon & Kate announce they're working it out tonight...for the kids.

-Once you get past the stank, Indian food is actually quite delicious.

-This is acceptable to wear in public.

-Nickleback has an album that doesn't suck balls.

-The boys at Georgia Tech are capable of picturing a woman naked in their imagination without tentacles present.

-There are benefits to cocaine.

-Our tax dollars are being used in the most efficient and cost-effective manner possible.

-Seeing this with my wife won't make me want to hang myself in the theater.

Bottom line, I have no idea what to make of Arkansas. Some people think this is the year Petrino gets all his boys on the same page, others think they're still a year or two away. But I have been burned so many times by Georgia trying to cakewalk through their mid-to-lower SEC schedule that I can't help but think the stars will align for Arkansas. On the otherhand, Arkansas does have quite the "Oh-fer" record against us in the last 14 years* (last win came in '93 in Athens). 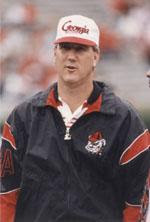 In Coach Goff's defense, he was out-coached by the legendary Danny Ford.

I don't think Arkansas has anything special this year, but I think they catch a travel-weary UGA team with their pants down in a game we should have won...but didn't. Plus if I set myself up for failure, it'll hurt less when it actually happens. (That means I will be assuming UGA goes 1-13 on their way to winning the 2009 National Championship.)

Arkansas has an uber-fast RB in Michael Smith, go here and fastforward to the :47 second mark. If you think our infamous shoulder-tackles will stop this kid...you're a moron. Transfer QB Ryan Mallett is a 6'7" hoss, but he's still relatively green and his O-Line might be better suited to protect a D-III quarterback. If Willie is hungry, he'll have his plate full but we've got to put Mallett on his back a few times. I'm counting on Demarcus Dobbs to throw that big meaty paw up in the air and knock some passes down too. Between that and stopping Michael Smith we should find out if we are men or...men shaped mice in this game.

Their defense should be the biggest weak spot. If Joe Cox still wants to put up some large numbers, he'll get his chance here. AJ Green should have a field day, but anytime the football isn't tucked safely under the pads of someone with a bigass "G" on their helmet it's up for grabs. In other words, it'd be nice to have Caleb, Richard, or Carlton step up and give us some quality runs.

My final call is Arkansas 27, Dawgs 24. They will have played Missouri State and taken a "bye" week over the same span of time we've traveled to Stillwater for Okie State, back to Athens for SCU, then back out again to Fayetteville (for a grand total of 2,620 miles by the 3rd week). It sucks, and I hate to lose...but I'm being a realist here and I think this is the first loss of the season.

If nothing else, take comfort in knowing a team with 1 loss has nothing to lose in regards to playing any undefeated counterparts.

*That sounds a lot better than it actually is, we've only played 5 times since then but they haven't won in 14 years so I'll go with the wording which makes us sound better.
Posted by Mackie at 9:05 PM

Labels: b3h0ld teh futurz1, SEC, sorry this is not news

I hope you are wrong about this one.