I had an interesting lunch today with fellow blogger/Dawg fan Bernie, of Bernie's Dawg Blawg fame. 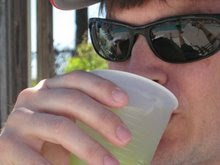 We met at the Varsity and had a nice little convo about life, football, and our interests. We had similar stories about how we got into blogging, and there were other common things we shared as well. Bernie spent time at LaGrange College before transferring to UGA. We both were in Italy for vacation last year. We both find women more attractive than men. He has 2 kids that are humans, I have 2 kids that are chihuahuas. The list goes on and on.

So I figured I'd take this time to introduce you to the Bernie many of you might never meet. Here we go...

-He works nights as a bus boy at Swinging Richards downtown.

-He once killed a man using nothing but an "I'm Georgia!" towel.

-His favorite part of college football is the Spring Game where everybody wins.

-When he was in college he somehow managed to get a bid from Phi Mu (women's fraternity).

-He drives a 1999 Ford Crown Victoria with 20" spinnaz' which is painted purple on the outside with brown leather interior. He refers to his ride as "peanut butter & jelly".

-Last Fall he survived being lost in Tempe, Arizona by drinking his own urine

...unfortunately he was lost in downtown Tempe and was subsequently arrested.

-His favorite animal is the Narwhal.

-He believes in magic.

-He thought Van Halen peaked in 1998 with Gary Cherone.

-He thinks Ray Goff should be rehired as head coach.

-His "super-secret tailgate spot" is at Toppers.

-He performed LASIK surgery on himself using a pair of scissors and a keyring laser.

-He cries when he drinks.

...as you can tell he's quite a character. So if you haven't checked out Bernie's Blog yet, do yourself a favor and stop on by. He's a great guy who can totally tell when I'm struggling for material because I write stuff like this.
Posted by Mackie at 1:18 PM

It was 116lbs... and narwhals themselves are magical creatures. Gary Cherone told me so...in Tempe.

That and jean shorts are deplorable. I despise you for writing otherwise.

3 points to clear up:
a. He didn't kill the guy with a UGA towel- but he did insist the Vandy fan "bark like a DAWG" before the brawl ensued.
b. our PB&J ride isn't a crown vic, but my granddaddy's old chevy caprice. Yeah, that's how we roll in Larryville!
c. he's actually turning 35 for the 5th time but he married a much younger wife

Despite the lull in cfb-this stuff is gold i tell ya!

This site gives you the complete information about your life.how you spent your life without any risk. These invigorating body treatments will stimulate and energize your senses, and leave your skin feeling soft, smooth and conditioned. Laser Hair Removal New York City, Botox New York City, and Facials in Manhattan performed by the Smooth Synergy Spa in NYC. laser hair removal manhattan .plz visit again.