Unless you've been living under a rock you've heard the big news over the weekend. Nick and his father, Joe were in Athens scoping out the Classic City for the 2010 recruit. As incredibly awesome as the publicity of having Joe Montana's son be a Dawg would be...it ain't gonna happen.

We are deep in 2009 QBs...2 deep. Unless this kid is a rare example of patience shown in celebrity children, he'll be looking for field time right out of the gate. Aaron Murray and Zach Attack-Mettenberger are our two freshman stallions right now and either one could potentially stay 4-5 years (barring early drafts...but surely not both would leave early). Though it's a fact Nick doesn't mind competing for his position, he already went head to head with Wayne Gretzky's boy for snaps in high school. It's rumored Trevor Gretzky's dad lost a fortune betting on his son winning the position battle (If I make up rumors, you hear it here first).

Also, ESPN has a pretty rough breakdown of his weaknesses...

He possesses the mechanics to throw when off balance and just enough strength to get the ball where it needs to be, but he does not have an elite arm. If Montana's feet are not set or he is unsettled, he is not the same player in terms of accuracy and production. To get the most out of his arm, he must utilize his entire body and be mechanically sound. At times if pressured he will look flustered and lose zip and confidence in where he's going with the ball. As with Jimmy Clausen in 2007 who attended the same school we are concerned about the overall level of competition he faces each week. Overall, Montana is going to be a player that needs to be in the weightroom and add strength and bulk not only for arm strength improvements, but for durability as well. He has a late bloomers frame and the tools to really develop into a sound, competitive prospect at the next level. Best football is definitely down the road.

...the two words that should scare you, Jimmy Clausen. 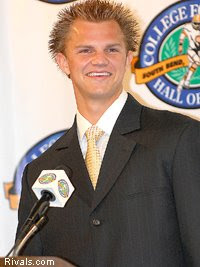 Look this douche-nozzle in the frosted tips and tell me it ain't a complement.

Anyway, if Nick wants to be a Dawg he's gonna have to earn his starting time. Matthew Stafford had to prove his worth before he got his first start against UAB his Freshman year. Biggest difference? Nick isn't competing with Joe T-3 and Blake Barnes, we've got 2 of 2009's finest QBs ready to piss in the new kid's Powerade.

So, I think it'd be awesome to have Nick in Athens, but I doubt the atmosphere will overtake his desire for facetime landing him at Georgia. Sorry to start your Monday out on a sour note, but this dose of reality can't be any worse than...this news.

...oh Vince, I thought you were different.
(Camera guy, you gettin' this?)

FUN FACT:
Not only did Nick Montana compete against Wayne Gretzky's son, but they were throwing passes to Trey Smith...Mr. Wild Wild West's offspring. Coming soon to the Disney Channel, Celebrity Highschool Musical.
Posted by Mackie at 7:08 AM

You're the d-bag nozzle. Calling out HS kids on their yearbook pictures! Montana won't go to Georgia because he doesn't want to be surrounded by ignorant football fans like yourself. Good luck with your freshmen QBs. They should have a great year for the Dawgs. Or not.

You're a fucking douche. Kill yourself.