Apparently it's big news everytime Coach's son visits a school campus. Since his departure from Clem(p)son the AJC has run stories about the visits to Valdosta and Georgia State. The funniest part (per usual) is reading the comment section below each story.

They are chock full of Tech fans and Georgia bashers who make comments like:

-Some parent Mark Richt is if he wouldn't even want to coach his own son.

-His kid must really suck if he can't even get into ugay on his daddy's coattails.

Bottom line, Jon Richt isn't good enough to start at Georgia...no problem with that statement. His father can still be the second coming of Vince Dooley without spawning a litter of Matthew Staffords in his own name. If you'll recall, Mark Richt wasn't really the best QB in Miami during his younger days but so goes the old adage, "Those who can DO, those who can't TEACH".

Jon Richt came from a small private school in Athens, unfortunately we can't all be Catamounts. So I think we can all agree the best thing for Jon Richt to do is forget about scholarships and go down to LaGrange College and play Division III football. He'll still be able to bleed red & black and get a great education in the same small, private school environment in the state of Georgia.

Aside from the 2006 and 2007 seasons, LaGrange has a history of winning and a strong tradition of dominating its conference. This year we return as reigning SLIAC Champions and Coach Todd Mooney is ready to defend his title. Also, you can rush Delt and have your dad donate a lot of money to our fraternity to build us a new house. Just some ideas for you, Jon. Don't worry, I'm friends with Coach Richt on Facebook and I'll make sure I link this post to him (though I doubt he'll need it because he told me personally he reads BloggingPantsless regularly each morning between coffee and Bible study). 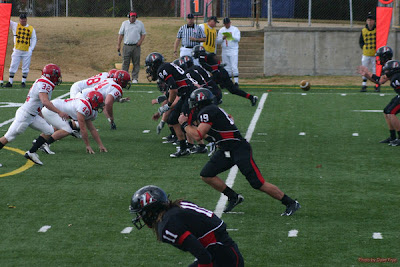 I agree LaGrange is and always will be a football powerhouse, but if he wants to be seen by next level guys, which is why he signed at a D-I (formerly D-I) school, then come to Valdosta State. Our National Championships are the only thing we need to sway him our way. An added plus: Our colors are silver, red and black too.

Stafford I know you're full of crap because the first thing you did was agree with me. I actually think he'd be better off at Valdosta than GSU of all places. If nothing else to keep the kid out of Atlanta...nothing good ever happens there.