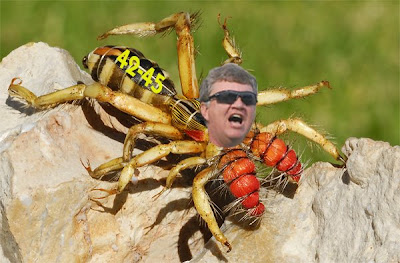 Injury bugs are highly concentrated in the northeastern quadrant of the state of Georgia. Though their bite is rarely fatal, the venom is known to be powerful enough to completely demolish any hopes/dreams one might have. The effects are usually permeated in knees, shoulders, elbows, or ACLs even though the bites generally occur in the ass-ular area. Once bitten the venom attacks the nervous system leaving a sinking feeling in the stomach and pain in the testes similar to a swift kick in the nuts.

I was surfing the interwebs yesterday and came across Bubba & Earl's post about what I'm most excited about with G-Day coming up. Just like everyone else I recognize this year is a bit of a strange bird. I'm not labelling it as a rebuilding year because we've got veteran leadership, it's just not the guys we've seen making headlines the last 3 years.

Options of their poll include:

My natural inclination was to immediately check the injury option because I'm a worrier. For years I believed Larry Munson when he told me we weren't big enough, strong enough, or fast enough to hang with our competition...all that stuff...I ate it up. Sure we were playing Western Carolina Community College for the Blind when Larry made said comments, but nonetheless if we didn't have our act together an upset could have happened, right???

With 5 of our 7 defensive ends out until Summer and now Kris Durham might need shoulder surgery I get the symptomatic sinking feeling commonly associated with watching the injury bug decimate your team.

Coach Richt stated he'll be the happiest coach alive in July (or June...or whenever he said all his injured players will be back). If nothing else, AJ Green says he's 100%. Right now that appears to be a shining beacon of hope in Spring practice.

Of course when you have 200-300 lb kids running into and falling all over each other injuries are bound to happen. I just hope the trainers are providing our boys with Tahitian Noni enemas and horse vitamin protein shakes in the meantime. The last thing we need is a team full of Mike Hamptons when we kick off the season in Stillwater.

ONE MORE THING:
A huge thanks to David Hale for linking my Percy Harvin Sir Smokes-a-lot post. It was a banner day for traffic yesterday at Blogging Pantsless with nearly 600 hits. A referral like that bumped David's Bulldog's Blog from Aficiando up to My Morning Crack status. I hope to draw some new readers from the exposure so thanks again. Good man, that David Hale...good man.
Posted by Mackie at 7:01 AM