Why I Support Damon Evans

I'm sure since this story has broken you've read all sorts of posts with everyone's opinion regarding Damon. If you're looking at this now, you're about to get another one.

I'll preface this by saying it is incredibly stupid to drive when you are sloppy-drunk and have no business operating heavy machinery. What I won't do is crucify someone for getting a DUI who just blew a .081 because there isn't that much of a difference between a person with a B.A.C. of .079 and someone with .081. The only difference is the latter's life is screwed because our government established .08 as the legal limit and anything beyond is an offense that can be held over your head for the rest of your life.

I've never had a DUI, but I couldn't honestly tell you I haven't driven with questionable BAC levels. But I didn't have a breathalyzer to tell me, and Damon Evans didn't blow in one so we will never know if he was 3 beers or 10 beers into the evening.

I've told my wife numerous times that I would NEVER put our lives at risk and I'm man enough to tell her we need to sit at the restaurant drinking water and eating crackers for another hour if she can't take the wheel for us.

So that's where I stand on the D.U.I issue, we'll never know IF he was drunk or HOW drunk he was, but his mug-shot isn't going to do him any favors.

Which brings me to my next point...the mug-shot. The dude looks like he's about to fall over. Did the camera operator say, "Alright Damon, smile and say GO DAWGS!" and that was the best he could muster? I doubt it. Perhaps I'm going over the limit (no pun intended) of defending the guy, but if the angry, overweight woman at the DDS isn't going to give ME the heads-up to smile I'm not going to assume Damon was given a 3-2-1 countdown either.

The last point is the girl in the car. I can't help him on this one, it looks skeezy as hell to be a married man with bambinos driving around Atlanta with a 28 year old woman close to midnight. He says they're just friends, the only thing we'll know to counter that is if he told Mrs. Evans he's going out to pick up some "groceries"...and by groceries he meant Courtney Fuhrmann.

So, that's where I'm at on this. I can't see how one night of exposed personal life should wipe out 7 years of OUTSTANDING service to UGA athletics. Mark Bradley of the AJC thinks UGA should send him packing...I've thought many-a-time the AJC should send Mark Bradley packing for much lesser offenses.

It's a touchy subject, and I'm sure anyone who has been personally affected by the death of a loved one see's this through a different light. I've lost a child-hood acquaintance to a drunk-driver who blew through a stop sign after a softball game. But what "I" think of the situation doesn't matter, his fate doesn't depend on my approval. I'm glad he didn't resign, and I think if he were to be released from Georgia he'd find another school in a heartbeat because he's great at what he does. A black eye for the program that's for sure, but as someone who has been hit in the face MANY TIMES, I assure you black eyes heal.

If nothing else, we can turn this event into an a photoshop free-for-all and pretend what it would have been like if Damon had just been drinking at the fraternity houses instead. 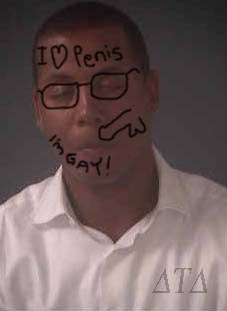 Let me know if my stance is way outta line. I mean no harm to the program, but I think we're better WITH Damon than without him. And for those concerned about how he can possibly tell athletes not to Drink and Drive now...look at the media circus that's followed him since this story broke yesterday.
Posted by Mackie at 8:23 AM

Labels: b*tch you ride the Marta bus, DAWGS, on my soap box

I believe in the first and the 2nd amendment. I also do my best to respond "nice" Yet, it is difficult to even listen when the comment has a picture with, "I'm gay" what the hell is that? Wait, right wing homophobia or middle school humor.

I will pray for Damon and his family. I wish them well, including Damon. I am a double dawg, two degrees from this cherished institution. Damon must be fired. I have been attending games at Sanford since I was a youngster, we don't need this type of leadership at UGA. I will never forget the Clinton scandal and you could not go out, go to a ballgame in Athens, heck take a pee without listening to the moral rantings of the numerous drunks in Athens on a Sat. Apply the same moral outrage to Damon.Doing a good job does not erase this type of behavior. Oh yeah, gay or straight, Damon is obviously heterosexual. His behavior was shameful.

Not to make lite of the situation but that picture was damn funny. Thanks for bringing back some good and not so good memories.

In my opinion he should be given another chance at his professional career. His marriage is a different situation. I have ZERO respect for any man (or woman) that runs around on their spouse. Especially when kids are involved.

80Dawg, I wasn't implying Damon is gay. It was a joke picture showing what would happen if Damon had passed out drunk on the floor of a fraternity house. Call it right-wing homophobia, call it middle school humor, but I was greek from 2001-2005 and during that time having insults written/drawn on your face in sharpie when you drank too much was common-practice by both my conservative and liberal drinking buddies.

I appreciate your opinion, and I'm sure most people will share your view. I was simply offering it the way I see it and I appreciate you taking the time to stop by my blog and reading what I have to say.

Kudos for another great post Mackie-judging by how hard i got hammered on twitter yesterday for taking the same stance, i'll be praying for you ;)

Dean Legee wrote a great piece today on Scout, giving what i think is a pretty realistic view on how things will likely play out http://is.gd/dcMZ9.

This is a horrible situation for all parties involved, no question, but as MaconDawg said, God helps us if Dr Adams is allowed to appoint another bureaucrat of his own image as a new AD. Ugh.

Hope you & your better half have a wonderful & safe July 4th!

You should support Damon Evans for I know he was a great player no matter what his attitude atleast he can contribute to the team! and that's what makes him a star.. Amanda Vanderpool