Oh boy, this is a GOOD one! Gotta thank Hamp Tanner for this one, but as far as vague rumors go this is not only the "vaguest" but it's also the "rumoriest".

"An unnamed person who owns an unnamed bar in an undisclosed location told me tonight that his source told him that CMR already has a committed DC. Said he could not tell me who it is."

What makes this great is the extreme ambiguity of a guy who doesn't want to be named telling Hamp that his unnamed source told him that Coach Richt already has his man...but can't tell us who it is.

that can only mean 1 thing:

Our next Defensive Coordinator will be.... 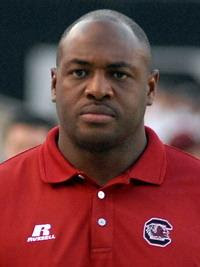 Special thanks to Hamp for the initial offering and Kit Kitchens for the two-fer!

Don't worry folks, this can't go on for much longer, the AJC is already reporting that John Chavis isn't denying the rumors he's headed to Georgia. OMG, did I just blow your mind with a three-fer!?!?
Posted by Mackie at 10:19 AM

Love your common sense approach to coping with the DC search drama. Rumors can be fun, and you are proving it daily.

DCRotD is the perfect balance. As informative as other legitimate sites such as FootballScoopDOTcom and yet close enough to Mother Earth to keep it real.