Looking to get traffic? Try featuring a segment related to the Defensive Coordinator search at the University of Georgia. For a guy who's been streaky at best the last month, 1300+ hits is what the kids these days call "the tits". (please note, link is to Urban Dictionary...not...you know.)

The DC Rumor of the Day shall from here forward be referred to as the DCRotD, like how LOTR is short for "Lord of the Rings" or TTPNDB was short for "Tim Tebow's Prom Night Dumpster Baby". Family Guy...always hip, Bruh.

Anyway, today's DCRotD comes linked from Bernie who shot me Chris Low's article from the WWL. This article does 3 things...

#1. They throw a name out there. That name being John Chavis from LSU, nothing new really. We've heard this name before, but it goes on to report that LSU Linebacker Kelvin Sheppard states he was pulled aside during practice and told

“You knew if I was going anywhere, you’d [Sheppard] be the first person I’d tell. I’m here with you all, I love it here, I’m not going anywhere.”

Hey, that's quite a heart-to-heart being had with a Junior LB...plus I don't believe I've ever heard of anyone at LSU lying to their players before... 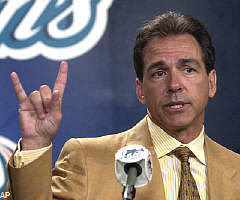 But I'm not mocking Sheppard or Chavis in this, I just love the thrills of speculative journalism...

#2. Chris Low gets into the dollars and cents of it all, claiming:

The word out of Georgia, though, is that the Bulldogs may go to $600,000-plus annually and offer a three-year contract.

Whoa, Nelly's bandaid! That's a serious chunk of change...I mean, it's not the 1.2 million that Gramps is swimming in up in Knoxvegas, but then again Coach Richt isn't hiring his daddy. It is, however, a lot of money for a coaching position with the added bonus of job security. So now we know the financial ballpark we're playing in (or technically, rumored to be playing in).

#3. Low throws out a couple more names from the NFL ranks. Todd Grantham of the Dallas Cowboys (whom David Pollack said "might be a name to know for Georgia fans") and Bob Sanders of the Buffalo Bills.

SO, what is there to gather from the DCRotD? Absolutely nothing! Why? Because there is no news and message board fodder gets reported as investigative journalism. Thanks again to Bernie (whom is definately hip because his emails end with "sent from Bernie's iPhone")...I'm assuming he's enjoying his time off wearing a flat-billed UGA hat, some nut-huggin' blue jeans, and his Advocare 100 Independence Bowl Victory T-shirt! ...you know, 'cause he's so hip!

But don't you worry Dawg fans, this segment won't last forever and the day we receive word from David Hale or an actual release from UGA Athletics we'll run the Defensive Coordinator FACTS of the Day and I'll fall back into relative anonymity.

I can't handle the message boards at this point. Some dude posted today that "everyone had better get ready bc it's Tyrone Nix." The "Tyrone Nix" part didn't bother me nearly as much as the "uninformed a-hole" part.

I gotta tell ya though, i'm enjoying the DCRotD posts. Keeping coming! Just not too much longer though...please, Jesus.

It will be great to watch Georgia Bulldogs, i have bought tickets from
http://ticketfront.com/event/Georgia_Bulldogs-tickets looking forward to it.

No,﻿ he's obviously birch. The original Red, Green, Blue, and Yellow games didn't have the option to play as a girl.amanda vanderpool model