...in case you're wondering how it's already part 9 of 10 with four games remaining, I'm not counting Tennessee Tech (assumed W) and the Nerds will get a write-up of their own.

There is little I'd rather see than Auburn Football open their season with a loss to a team coached by the Dooley bloodlines.

If there were ever a season it could happen (since Vinny left coaching in '88) this could be the year. First year Head Joke Eugene Chizik brings his coaching pants to the Plains for what would have been the biggest trainwreck hire of the SEC had Lane Kiffin kept his mouth shut. But all kidding aside he has no where to go but up at Auburn, and here's why.

5-19 over two seasons with Iowa State's product will probably translate into 5-7 with Auburn's players/schedule over the course of this year. Doubling your cumulative win total in only one season is something to be celebrated...right?

I think in a couple of years Auburn might be something to reckon with, especially their defense, but that time won't come until they get their Quarterback situation solved...again....this year.

A closer look at Guz Malzahn's offense makes it appear the Kodi Burns era might have come to a quick and bitter end. Junior QB Neil Caudle has the arm and the accuracy to make it happen, but Kodi Burns has a Bowl win and nearly a full season of starting experience. Does that mean anything if the Tiger Eagles aren't running a gawd-awful spread offense? Probably not, but at the moment the QB sitch isn't resolved and could potentially be up in the air until September 5th.

OC Malzahn isn't going to be throwing around a 2 quarterback rotation, so look for him to make his bed and sleep in it...even if it stinks. 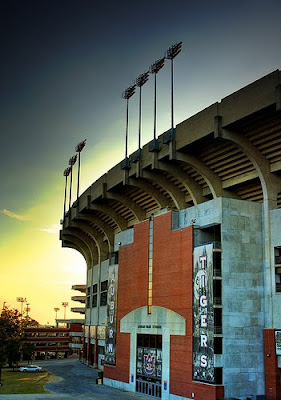 though I assume a bed made anywhere near this thing already reeks of Slim Jims & Aqua Velva.


But getting back to Gene Chizik, perhaps Ed Orgeron has screwed up my view of Defense-minded head coaches. I think there is a certain level of insanity that defines the great DCs, and I'll give Chizik that much, he was a great DC. But making the transition to Head Coach hasn't come easy for many DC's since the late, great Erk Russell, God rest his soul.

Best case scenario, Auburn wins 7...I'd be surprised by 8. One thing's for sure, however many they win, one of them will NOT be against Georgia.

Looks like it'll be a beautiful early afternoon game in Athens, Dawgs roll 34-12.

UPDATE:
...yes only an hour after I wrote this I'm updating it. Unfortunately when you don't do your research you miss things of minor importance like the fact Chris Todd has already been awarded the starting QB posich. Nit-picky I know, but only because I want to bring you the latest & the greatest information from the interwebs. I still stand behind my claims of 0% journalistic integrity.
Posted by Mackie at 7:10 AM

Cheese on a Stick will not win 7 games this year.

The collapse of Colonial means Bobby Lowder now has sufficient time to coach the football team himself.

Cheesestick will be fired immediately following the first loss. Bobby, if Ted Turner can do it so can I, Lowder will take the reigns and ensure that 100 years from now people will talk about Auburn as they do Sewanee.