Year in and year out, the University of Georgia ranks in the top 10 of branded merchandise sold. Most top SEC schools do, simply because we are a rabid fan base who squeal with glee once August rolls around and start to pee our pants with hopes Gameday goes back to the old Bubba Sparxxx opening instead of that GAWD AWFUL Big & Rich "Comin' to your sh*ttay" version (5 years removed, it looks like it ain't happening).
An Auburn version was the only trace of its existence I could find, BARF!

Anyway, back to my main point. Every year, if you are anything like me, you set a budget on how much money to blow on preseason Georgia gear. My family is a thrifty bunch, I've even been accused of being cheap by my wife...who's blog includes posts on where to get excellent grocery coupons online...so I must be pretty bad. This post is to help you get the most for your money and share a tip on where I've found some good deals.

If you are familiar with the Marshall's, Ross, and TJ Max circuit you know there are times you'll find a disaster area with random crap. Other times it's reasonably clean with some good deals. The college football preseason is one of those times you'll find some quality stuff.

I found a couple of good things at Marshall's yesterday, here's what I got.

#1. New UGA hat. I've got a lucky hat I wear all the time. It's dirty, smelly, and used to be red (it is now a pinkish-brown). That being said I still try to buy a new Georgia hat every season just because I feel the urge to do so. There are a ton of online retailers where you can find the variety you'd like, but for a small selection at great prices check out Marshall's (this was found by Cumberland Mall in Marietta). I decided to go with the bone pattern, Nike hat which was priced at $7.99. 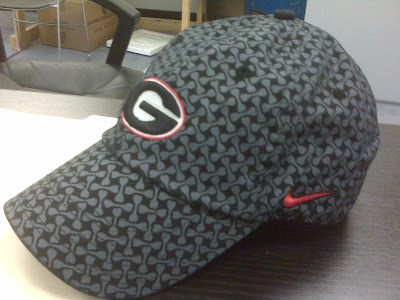 #2. At the same Marshall's I came across a freakin' STEAL! They've somehow managed to come across the brand spanking new Authentic Orson Charles Blackout jersey before UGA even played the kid in a Blackout game! 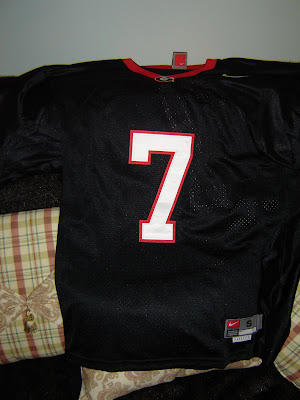 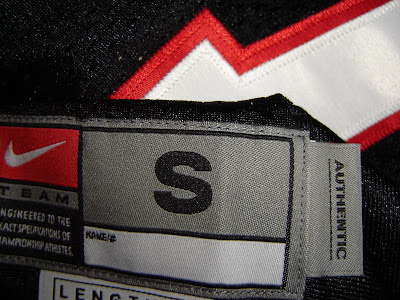 ...alright, well obviously this is an old Stafford jersey but from what we're hearing so far Orson might be our next big thing.

Therefore, when I saw it with a EM EFFIN' $19.99 pricetag hanging off it I decided to consult Bernie who is known around Larryville as a man of high-fashion (regardless of the whole dark socks with sandals fiasco). With Bernie's blessing I decided to make the purchase which had obviously been mispriced. 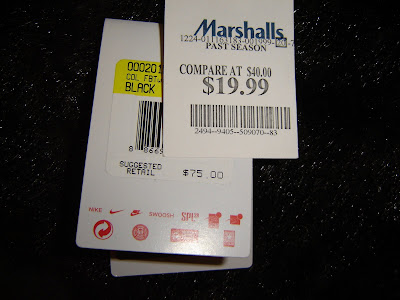 I'll readily admit, I'm more of a Reds and a Polo kinda guy when it comes to attending the game. But I figured since it wasn't the dreaded Wal-Mart screen-printed jersey it would work well around the house when I decide to hang around home for Saturdays. That brings me to another question that I've set a poll up for (top right of page).

"Is it socially acceptable for a grown man to be walking around in a college football jersey?"

I know I've seen them around Athens, but since college football is a slightly more formal affair in the South I wasn't sure how people viewed this. Vote or Die.

So that's basically the sales pitch for discount clothiers. It wouldn't hurt just to swing by and check out what they've got. I also saw some polos, gym shorts, etc I would have purchased had I not already owned some. But aside from your wardrobe I'm going to hit on one more thing.

The Grill Topper
I recently added Grill Toppers as a sponsor of Blogging Pantsless which I couldn't be more thrilled about. They've completely renovated their webpage as of yesterday and offer most big-name schools (even thought there is only one that matters). Grill Toppers didn't have to send me anything in order to get my praises. I've been branding every single hot dog I've eaten since Christmas with "Georgia" because my wife bought me the hot dog iron last December! If you want to really impress your fellow tailgaters this Fall, pick up the full rack sized Grill Topper which will brand 5 hamburgers at once!

But we welcome Grill Toppers with open arms and open mouths. We're all aware there are only 31 days left until we show the numbnuts in Stillwater how to properly tailgate. So break out the cash, get you some new UGA stuff, and get ready because September will be here before you know it.
Posted by Mackie at 7:04 AM

Labels: ...and now a word from our sponsors, DAWGS, fashion...seriously.

Just as long as Marshalls is not owned by some guy named Wilbur...