I'm not gonna lie, I got a HUGE kick out of the Senator's commentary on the cancellation of the Tech/Bama series.
The first post was the best with this little gem from Sting Talk:

My friends in Tuscaloosa say Saban admitted that Bama wimped out. He said when they scheduled us they thought they’d face a Chan Gailey-caliber team, but now they don’t think they could handle us on top of their SEC schedule. They’re going to postpone the series until after Groh is too old to possibly coach our defense.

I don't know which is funnier, the fact Tech assumes another team would "wimp out" against an ACC opponent, or the attempt at passing a lie that Tech fans actually have friends.

But as stated, once the black helicopter's stopped circling and Tech's AD, Rad Dan Rad, stated the series was postponed in order to balance THEIR schedule...the lolz commenced 3-fold at our nerdly in-state rivals. 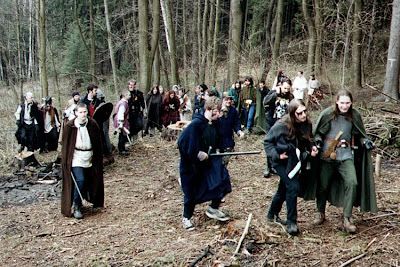 But never fear Tech fans, you are still feared...not in football, but in Kennesaw, Georgia where they fear your LARPing will interfere with their Civil War reenactments.
Posted by Mackie at 9:45 AM

There is real LARPing going on in Atlanta. Don't believe me? Go drive by Blackburn Park in Dunwoody on a Sunday around 1:00PM. I bout crashed my car laughing the first time I saw it. People in knights outfits with big foam swords. Absolutely ridiculous!

What's say we get a big group together and all dress up like Yo Gabba Gabba characters and crash their "fight".

I'll buy a bunch of swimming noodles from Wal-Mart and we can use those as weapons!