That's it folks. The 2011 football season is officially over. Congratulations to my team-in-law on their 14th National Championship, @Olivethetweets was ecstatic last night and I was happy for her (regardless of how much gloating she did...and YES Sweetheart, calling the Dawgs "the Cubs of the SEC" is gloating no matter how kind-hearted your intent was).

But that brings me to my next point, one thing I REALLY was not looking forward to is our fanbase today. Almost as much as I dreaded reading about us after the Outback Bowl. Be it on Twitter or some of the blogs I read, I just know somebody is going to compare our current state to that of Alabama football. It's not that I can't handle reality, because I can. I can admit that Alabama and LSU are both programs much better than ours. What I can't stomach is our fanbase. Yes, our fanbase.

I love a good 90% of you guys. But the remaining 10% lack a fundamental understanding of...well...understanding.

Every fanbase has it, but lately I just get fed up with hearing the whining and bitching that we aren't Alabama, or we aren't LSU...can you not be happy just being Georgia?! College Football is cyclical and here is how I see it following our last 10 win season in 2008:

I'm making a lot of excuses, but when your cogs and personnel turnover happen at the rate it happened for us over the past 3 years...then YEAH expect a dip in quality for your program.

2011 - Started out like crap. Lost to the 2 toughest opponents on our schedule right out of the gates, but we saw a few signs of hope. When was the last time you had an ounce of faith in your defense? Did you see the season Jarvis Jones had? We watched Malcolm Mitchell become our next big passing threat. And our fans who want to bitch about Isaiah Crowell not playing on an injured ankle which NONE OF YOU, NOT A SINGLE ONE OF YOU WITH A "source" IN THE ATHLETIC DEPARTMENT OR A FRIEND WHO HEARD SOMETHING knows the extent of pain he felt trying to turn on a dime while carrying nearly half of our team's rushing yardage.

Getting suspended for smoking weed? "Yeah, what an idiot" says the guy in Law School who took a year off to follow Widespread Panic. Crowell has a ton of talent, and probably an attitude to match it, but we stuck a ton of pressure on an 18 year old kid and he performed well when able. Cut him some slack.

Remember the difficult time we had recruiting when these superstar high school athletes wanted playing time instead of earning reps behind AJ Green? Well, they went to other schools and some of these other schools are performing with them. But with a couple of down years, now it's UGA's turn to recruit high profile talent who can come in and make an instant impact. Last year's Dream Team did a helluva job for a bunch of young guys. I'm pretty pumped about the prospect of guys like John Theus, Jordan Jenkins (whom I just found out about this morning), and Keith Marshall (Isaiah Crowell is gonna grow up REAL FAST this off season).

We've got a defense that will return a lot of guys, really hoping Bacarri comes back for what could be an awesome year. The biggest names we lose offensively are Ben Jones (which will hurt) and with a little luck Orson Charles sticks around (which my insider source in the athletic department heard from a friend of a friend that he will).

This is Mackie being honest. Take a step back from the ledge. UGA football is not in a downward spiral following a 10 win season where we won the East with a bunch of young guys. In watching my wife's excitement last night searching out Bear Bryant quotes to post, it made me think. The Bear is without a doubt in my mind the absolute best coach in the history of the game. Mark Richt will probably never be Bear Bryant, but there was time in college football where patience paid off.

That's Alabama football, correction, that's Bear Bryant football in a 4 year stretch between some of their program's most storied seasons.

The game has changed, I'm well aware. Every fanbase expects a new coach to win immediately (see our jort-wearing neighbors to the south). But it's a cycle and as long as you aren't in the lower echelon of the SEC you'll have your time to shine in the national spotlight. Eventually Tennessee will be Tennessee again, eventually South Carolina will be South Carolina again. When my wife and I were still dating, I saw some pretty awful Alabama football games. Since my wife and I have been married, she's seen some pretty awful UGA football games. And now that we're expecting our first child there is a pretty good chance he or she will see some pretty good and pretty awful games in their lifetime. 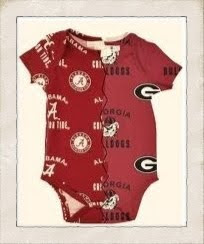 (...still looking for one of these)

I've always been a patient person, sometimes too patient. It probably doesn't help that I'm turning into this worthless ball of emotion when I see a sonogram of my baby. I might be going soft when it comes to taking a stand against what is acceptable from UGA Football, but when I put it into perspective I like what I see, no matter how frustrating it can be sometimes. I'm happy we went for it on 4th and 1 in Michigan State territory last week. You know why? Because we didn't go for it on 4th and 1 in Central Florida territory last year. We wanted Mark Richt to take more chances this year and he did. On-side kicks against South Carolina and LSU were huge (yes even though the USC one was overturned on a crap call) but if you're willing to take the good when it happens, then suck it up and take the bad too.

2012 can be something special for the Dawgs. Stop bitching and get on the bus.

Labels: are we there yet?, beefs, coaches, DAWGS, dieing hurts, rants and raves, SEC

Amen...to every bit of this. And congrats on the kid!

I agree with you Scott.. congrats kid! amanda vanderpool fashion