There are a lot of people who end up homeless by habitually making bad decisions. These bad decisions usually do nothing but slowly alienate you from friends and family as you drift in with a crowd of fellow bad decision makers.

Is Lane Kiffin a bad guy? I can't say that I know him personally, but my head says no. What I can tell you is he came into the SEC during the off season and like clockwork the smallest prick initiated the pissing contest. Over the course of this downtime Lane somehow managed to piss off anyone and everyone who would listen. So he has alienated himself from his SEC family (quite a dysfunctional bunch), except for his fellow homeless people...now replace the word "home" with "tooth" and you've got VOL NATION 2k9 BABY!

According to the Gerald Celente-like accuracy of the Pantsless Preview, our Dawgs roll into Knox-vegas after a huge victory over LSU. The Volunteers will have just finished playing Auburn in the newly minted Dunce-Bowl the week before.

Just like Tennessee, Auburn is also breaking in a new Head Coach...and I whole-heartedly believe many War Eaglers are huge fans of Lane Kiffin. Why? Because if Lane Kiffin hadn't been hired and started mouthing off to people, all the press would be on what a bunch of dumbasses the Auburn fans are for running off Tuberville and replacing him with Iowa State uber-leader Gene (chizzy-chizzy) Chizik...but I digress.

We don't really know what kind of toll the Tigers will play on Tennessee, but I have a good idea we'll be in the same boat after playing the other Western Division Tigers the same previous week. So we have no real scheduling advantage because at the halfway point in the season, as grueling as our calender has looked at least we haven't played SEC headliner Jesus Jr. and the Florida Gators.

Anyway, so we know Tennessee Safety Evan Berry is the freakin' man. What we don't know...

...then who is this Evan Berry I've heard so much about?!?

Well, I guess if Coach Kiffin is comfortable with putting Tennessee recruitment in the hands of Gary Glitter, then who are we to judge? 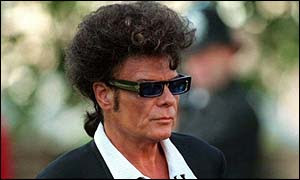 But where was I? Oh yes, Eric Berry is a freakin' beast (I would only suggest clicking that hyper-link if you're comfortable with the taste of vomit in the back of your throat...if you were Greek in college I'm assuming you've come to appreciate the sensation). So that guy's going to be back which means we better have our $#*! straightened out at RB because I don't know how much I trust Joe Cox to stay away from this character. With any luck, he has a great Junior year and leaves early for the NFL so we don't have to hear that cracking sound next year. If not, perhaps he'll see the value of his skills and transfer his final year of eligibility to Life College and become a chiropractor instead.

Also the Vols will have a go-to guy in Gerald Jones at WR...but luckily my grandmother is still in the mix for playing Quarterback at UT next year so I doubt his threat will match his talent level. Either way, as I've stated before I've got high hopes in our defense improving exponentially for the 2009 season and I believe the Willy-Mart will be open for business.

I've always said "Rocky Top" is a song best sung by someone reeking of bourbon, oozing with sarcasm, and wearing faded red pants. At last check, Vegas had our boys at 3 1/2 point favorites...I'm gonna give them a full TD.

At this point, if the people dressed in Orange aren't wishing Kiffen had kept his mouth shut...they probably haven't learned their lesson and will continue to go about making the same bad decisions that got them in this ugly toothless situation in the first place.
Posted by Mackie at 7:52 PM

Let me start off by saying two things;

I hate the Vols as much, if not more than the nerds on the flats or the pricks in the swamp…

Sure that was a mind scrambling hit Berry put on Knowshon…

But if the officials are going to start call the pansy “horse collar” tackle, they certainly should be calling helmet to helmet hits, which that totally was! Any normal man would not have gotten up off the ground after that hit…Go Dawgs!!!!!

Anon, I agree 110%. It's a tough sport, had it been me I would have called it a day and turned in my jersey after the coaching staff scraped up my remains off the field.

not to challenge your seer ways, but I think the RB situation will settle itself against Tennessee. Can't say who it will be, but one of them is going to shine against the vowels.

I heard Eric Berry wears a pink jock and enjoys HGTV. He must really be a mystery to the toothless wonders.