I stumbled across this the other day and thought it was cool enough to share. It's a website of historical helmets encompassing college and pro ranks called, The Helmet Project.

Perhaps the coolest thing I found was regarding my most hated rival, the Florida Gators. 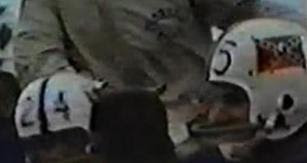 ...as a fan of college football, history, and the South I'm neither appalled or offended (remember this was is 1962). In fact I find that to be pretty damn cool that an SEC team shoved it in Penn State's face. Perhaps the most shocking thing was discovering the Gators played football prior to the 1990's.

Another interesting bit of SEC history is what Tennessee did with their 1965 helmets...good luck to anyone attempting a design like that in 2011.

No real shockers in UGA's helmet history, but I take great pride in saying I saw in person how HIDEOUS the October 31, 2009 helmet was in person. Never forget, never use again.
Posted by Mackie at 7:35 AM